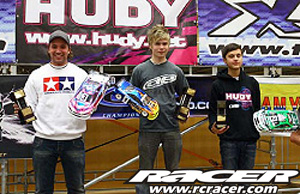 Reedy LiPo batteries once again powered the winner of a major touring car event. Christer Andersson, driving his TC5R powered by an LRP SXX/Vector X-12 and Reedy 4900mAh 5C LiPo battery, drove to victory from the pole position at the 2009 Rebellion Race in MÃ¤ntsÃ¤lÃ¤, Finland.

This prestigious event is held annually, but this year’s edition also served as the warm-up race for the 2010 European Indoor Championships. As a result, the top European drivers including the current World Champion were in attendance.

Undeterred by the high level of competition, Andersson was able to secure the coveted pole position in the rocket-round qualifying format. Carrying momentum into the finals, Christer won the first leg of the triple A-mains to give him the early advantage. A second place finish in leg two meant that the championship would come down to the final leg. The close finishes in the first two legs were not repeated in leg three. Christer Andersson dominated the race and claimed ownership of the top step of the podium and the label of Euro Indoor Champs favourite.

With 28 World Championships and hundreds of National and Regional titles, Reedy continues to power race winners around the world.