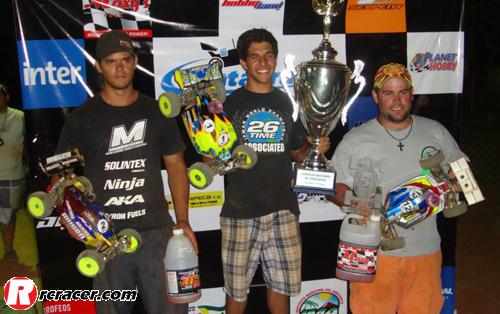 The 2012 Venezuela National Championships was held in the City of Maracaibo at the Santa Cruz RC track during the first weekend of June. With temperatures hovering around 115-degrees Fahrenheit, 72 drivers set out to compete in buggy and truggy classes for the National title.
Three-time Venezuela National Buggy Champion and JConcepts team driver Renato Tradardi Jr set out to win his fourth title in a row. Taking the TQ spot, Renato Jr was able to settle into a comfortable pace and win the final with his JConcepts-equipped RC8.2 running Hybrids tyres. Renato Tradardi Sr also dominated the truggy final with his JConcepts-equipped RC8T running Sevens tyres. Congratulations to both drivers on a well earned victory.