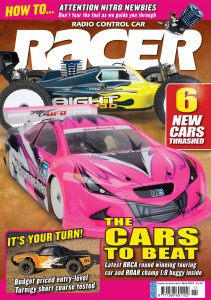 Features
A Day in the Life – This month’s diary piece from Olly Jefferies sees his reflect on his weekend at Aldershot as he runs through the event from Friday evening to Sunday night.
Xray Column – Juraj Hudy brings you up to date with the latest news and goings on from the Slovakian brand.
New To Nitro – As Justin Noble gets his hands dirty with a future nitro-powered review, he decides to offer advice and guidance to getting started with nitro.
Truckin in Style – Tamiya Truckin are famous for their demos on their awesome scale track they take from event to event. After building a suitable Tamiya truck in last month’s issue, Joe Brown got the opportunity to join the team at the Wings ‘n’ Wheels show.
Rain Stops Play – The rain brought the penultimate BRCA 1:8 Off-Road National at NRC to a premature end but not before the championship contenders had battled it out for TQ honours. Simon Reeves looks back as the race for the title heats up…
LRP’s Success in Spain – Martin Bayer took his first victory in the 1:10 off-road class at European Championship level when the 2013 visited Spain and in doing so, continued LRP’s long run of success in the category.
Jefferies Grabs His Chance – Mixed conditions would make the penultimate round of the season’s BRCA nationals in 1:10 touring car and it was Olly Jefferies who added his name to the list of drivers to take wins in 2013.
One Down, One To Go – Neil Cragg’s performance at Stotfold was enough to ensure him the BRCA 1:10 Off-Road National title in 4WD and with a win in the 2WD on Saturday, saw him place one hand on that trophy too.

Reviews
Turnigy Trooper SCT-X4 ARR – this Trooper short course truck appears to offer incredible value. Supplied as an ARR, we added a Hobbyking radio set and LiPo battery before applying the finishing touches. If you are looking for a low-cost entry level SC, then the SCT-X4 could be for you. Read on to see how it stacks up as we take it bashing…
Tamiya Novafox – the Fox name returns in 2013 but this time it’s a re-release as Tamiya launch an updated mid-eighties classic. With great looks, the Novafox will appeal to those who are seeing it for the first time as well as older readers who remember the original. One of our more experienced contributors flicks through his photo album and reminisces as he builds the new Fox.
BSD Racing Prime Baja – we have seen models from BSD Racing in the past but the Prime Baja is their first 1:10 baja-styled buggy. The electric-powered Prime Baja is a brand new platform to their line-up and comes as a complete RTR package for under £100 including mains charger and 1800mAh NIMH battery. Making the most of the good weather, we hit the beach to tear it up…
HoBao Hyper SST – the latest Hyper truggy follows quickly in the footsteps of the SS buggy model and so closely in fact that the one we had was an early sample from the UK distributer. So here is our UK exclusive review of HoBao’s new RTR truggy, the SST…
TLR 8ight 3.0 – the latest version of the 8ight competition off-road buggy is effectively the car that Darren Bloomfield used to win the European Championship in 2012. Racer gets to build the 3.0 kit as analyse all the changes and updates incorporated into the chassis that has already won big in the US.
Schumacher Mi5 – current touring car design is pretty staid with just the smallest of changes being made as the chassis’s are finely fettled. But with the new Mi5 TC from Schumacher, they really have come up with some new ideas as the platform uses carbon fibre for the wishbones and a pair of vertical top decks too. Now we have you hooked, check out our in-depth analysis.