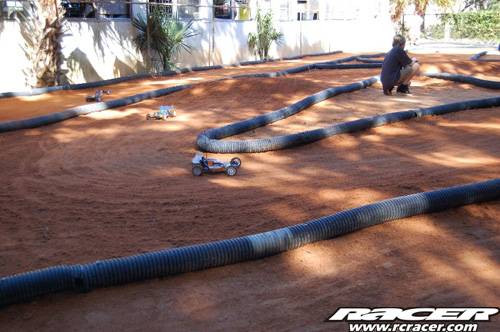 It was time for a new twist in the Super Cup as we headed into round three. Extreme Hobby Zone in Winter Haven is a new stop on the Super Cup series and I have to say I’m pretty excited. Hobby Zone presented us with a smaller track than we are used to but right away I noticed that it made for extremely competitive racing. Qualifiers and drivers were separated by very little which made every lap so important.

Our trip started with getting packed up and making the one hour drive to Winter Haven. We were ready and when we arrived the track was already about 75% ready to go. Paul jumped out onto the track and started directing some jump building while I parked the trailer. We had a new eager racer Austin Blankenship and his father who were also helping with the track and Austin’s dad helped with backing up the trailer. 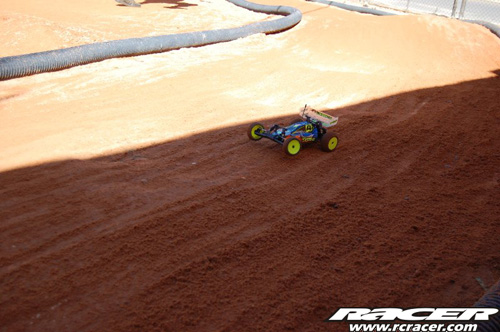 Once the trailer was in position it was time to unpack and start a little practice. I bummed a couple practice laps from Sherwin and others. Track was fun and my buggy was now charged and ready. Double Dees in the rear and Groovy’s in the front were the dialed setup early. Everything felt good and I was ready for Saturday.

Friday night we met up with Rich Muller at Longhorn and once again Paul and I both had the parmesan crusted chicken. Pretty good stuff!

After dinner we hit the local hangout, Jessie’s. Jessie’s is the local bar that has an assortment of games and to our delight, Craig Lowe and Rich taught Paul and I a new game called sand shuffle board. I was disappointed that this didn’t require any RC car knowledge or ability but I thought I would give it a shot anyways. After some practice Paul and I got the hang of things and we were quite competitive. I believe Craig and Rich will be looking for a re-match pretty soon. Ha-ha.

Saturday morning we set-up our pits and looked over the track and helped arriving drivers get sorted. The race appeared to be a great turnout and I believe this is a great facility for our Super Cup events. I got the B4 ready and hit the track for a morning practice run again with my Double Dees rear tyres and Groovy fronts. I was happy with the balance and I figured with the track drying out the vehicle was only going to get better.

In qualifying it appeared that Gary Fulp was again running quick in the 2wd stock class and Tim Moon and Scott Delfino were running strong once again in stock truck. Short course truck featured Malcolm Stewart putting in some quick runs and JR Mitch turned it on in Modified short course and set TQ. 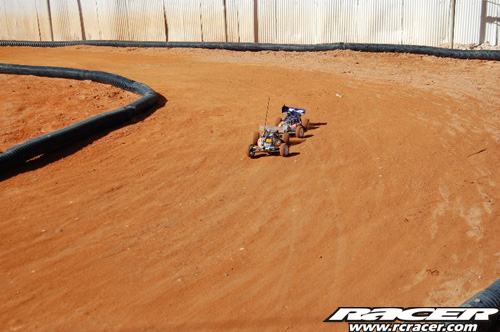 In the truck modified class Paul Wynn put in an excellent run and was able to take TQ utilising his run from round 1. JR Mitch and Sherwin Diaz also put in great qualifiers with JR sitting in the second position and Sherwin in the third spot. 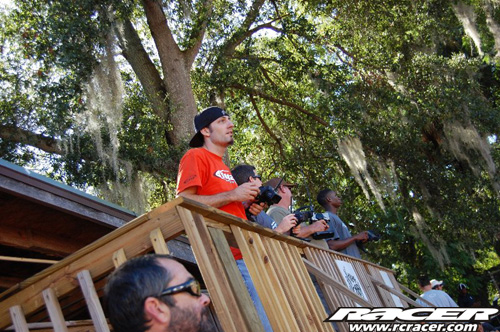 4wd modified was a little more difficult at first because the track became really bumpy and it took some track time to determine exactly the racing line of choice. By round two I was pretty confident where to drive my buggy and put in a quick run with 16/6:03, almost getting the elusive 17 lap run. Mike Barone with a great first round qualified in the second position with Ryan Eckert in third.

It was track maintenance time and everything was coming together for the main events. The Calcium was setting in quite nicely courtesy of Andy Ousley of Outta Control Raceway and it looked like Hobby Zone was ready to blue groove. I got a fresh set of Double Dees mounted for the 2wd main and I was ready to go. I planned on using the same set on the 4wd so I was hoping to not burn them up to quickly in the 2wd main. 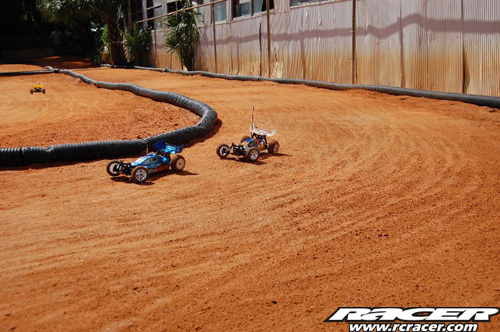 As the horn went off Paul and I were side by side and I wasn’t feeling very comfortable and Paul squeezed by and into the lead. By lap two I was right behind Paul looking to make a move and by about lap three I had taken the lead and was feeling good. The race for second through fifth was heating up quickly between Paul, Andrew, Ryan Eckert and Leon. At about four minutes in I thought I had the race in control and was in cruise control and the buggy felt good.

Just when I started getting comfortable I crashed at the end of the straight-away which cost me a few seconds. Ok, no big deal just one crash, oh wait I crashed at the end of the straight-away again. This was getting ridiculous! Ryan Eckert pulled up on the back of me and was within striking distance. Settling back into a groove, I thought, ok time to re-group a little bit. It was a little too late as I was in a crashing rhythm and crashed through the moguls. Ryan took the lead. I drove a frustrated two laps rather punched and pulled in right behind him as we entered the last lap. I made a â€œgo for it moveâ€ at the end of the straight-away (apparently my favourite place) and stuck it into the pipe. Paul cruised around on the outside to take over second and Ryan Eckert took a well deserved win. 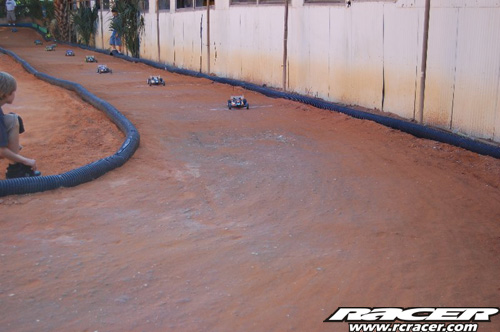 I took my turn marshaling position in the corner and watched the stock truck A-main. Scott â€œthe madmanâ€ Delfino was the TQ with Tim Moon in second. This was one of the best races of the weekend. Scott held the lead temporarily but Tim the â€œveteran masterâ€ moved his way slowly into the lead. Scott put in several clean quick laps at the end and moved to within two seconds of Tim however it was not going to be enough. Tim Moon takes the win with Scott Delfino in second.

The 2wd stock main was all Gary Fulp. For the second Super Cup in a row Gary was on fire and racked up another victory. I have a feeling the points championship in 2wd stock is starting to tighten up quite a bit. Tim Moon continued his hot day with the second place finish and Dave Duncan in third.

The short course A-main was a battle as TQ Malcolm Stewart got hammered and severely T-boned in the first turn and dropped to last. Scott â€œmad manâ€ Delfino took advantage of the early race incidents and took the lead. Scott was on a mission and checked out from the competition. Young Austin Blankenship worked his way up through the pack along with Malcolm and the two drivers battled in second and third throughout the race. Scott Delfino took the win with Malcolm Stewart finishing in second and Austin Blankenship finished third in his first Super Cup race ever.

Modified truck TQ Paul Wynn got a good start and held the lead for several laps until a mistake put Leon McIntosh into the lead. Leon stretched his lead as JR Mitch moved into second. JR was starting to get a handle on the track layout and would gain seemingly two seconds in one lap and then a bobble would cost him the time right back again. Toward the end of the race JR tightened up onto the lead and drew within a turn of Leon. JR made a small mistake allowing Leon the breathing room necessary to finish off his first win of the series. JR finished a very close second with modified truck point’s leader Paul Wynn in third. 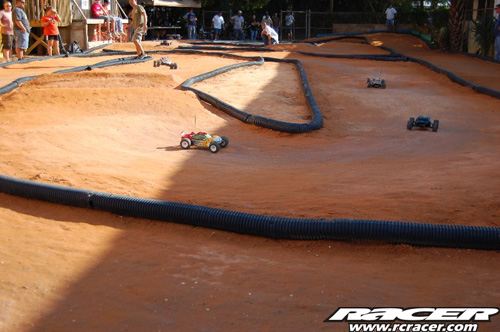 I have to admit I was a little more determined in 4wd. I was a bit upset about letting go of the 2wd main and I wanted to take it out on the rest of the group in 4wd. Not in a bad way, but I just wanted to stretch the legs of the B44 and turn some good laps without mistakes. I took the tyres off the rear of my B4 and put them right on my B44 for the main. Everything looked good and the track was really starting to come in traction wise.

At the tone I pulled the holeshot and Mike Barone and Ryan Eckert were close behind. It wasn’t long into the race that I heard someone say that Ryan’s switch turned off. I’m not sure what happened but I had a really big lead and I began to cruise. A conversation broke out under the driver stand about lap times. I felt obligated to turn on the jets for a lap and throw down a hero lap in the main. With a sizeable lead I took off for a hero lap and ended up turning a 21.2. I wanted a 20, but, hey I will take it. Ryan made a hard charge to the end and made up a lot of time and got into the second position. In the end I took the win with Ryan Eckert in second. 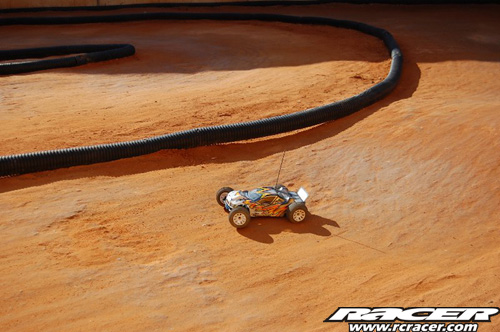 Modified short course was the last race of the day. JR Mitch looked great in qualifying and seemed to be very comfortable with his JConcepts equipped SC10 and Goose Bumps tyres. In the main JR pulled a great lead with Scott Delfino in second. The middle of the race brought on a little close racing action with JR and Scott as the two bumped wheel to wheel several times and traded a little short course paint. JR’s quick consistent laps won out in the end and he easily took home the win with Scott Delfino in second and Dan Borkowicz in third.

Wrapping up I just want to thank Bobby Phillips for his work to make the Super Cup Series a success along with the Extreme Hobby Zone crew on a well hosted event. I’m looking forward to round four at Coral Springs on November 21st!