The 5th Annual International Indoor Championship (IIC), presented by Scotty Ernst, was hosted over the weekend of September 10-12 by the Riviera in the heart of the Las Vegas strip. With 90 entries in the class, Team Associated/Reedy’s Keven HÃ©bert took his TC5R to the top qualifying position and eventually the “A” main victory in the ultra-competitive 13.5 Rubber Touring Car category.

HÃ©bert was on a mission to add to his impressive career resume by setting the fastest time each time he was on the track. With challenges from World Champion Andy Moore, multi-time Reedy Race and National Champion Barry Baker, the young Associated star stood up to the pressure and claimed the top qualifying position. Joining HÃ©bert in the A main event for Team Associated was Josh Hohnstein.

As the tone sounded for the main event, HÃ©bert jumped out to a lead that would never be challenged. Waiting in the catbird seat, Hohnstein took advantage of a tangle between Moore and Baker and jumped in to second position. Three minutes later, Hohnstein had Moore all over his back door and never cracked; even making a clean pass back on the World Champion after a wide corner. With HÃ©bert on a victory lap, all Hohnstein had to do was drive around traffic to claim the top two podium positions for Team Associated. 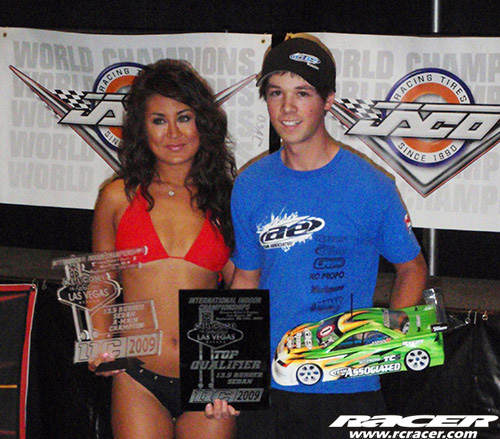 This win for HÃ©bert tops his resume for race victories, but wasn’t unexpected as the Canadian standout has multiple runner-up positions and podium finishes against some of the world’s best. As an IIC champion, HÃ©bert has to be the odds-on favourite for the ultra-competitive Grand Slam Series that takes place over the winter months in the Mid-East Continental United States.