Victory in the Wars For Olly And TC5

Victory in the Wars For Olly And TC5 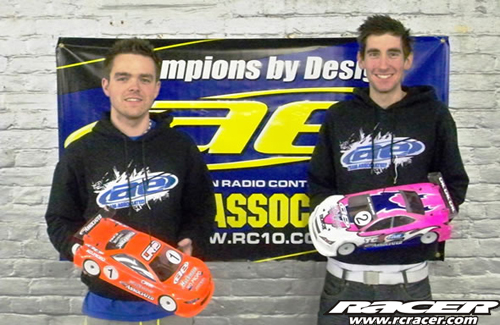 Associated team driver Olly Jefferies kicked off his winter touring car campaign with a win at Round one of the Carpet Wars series.

Round one of the Carpet Wars series was one of the first major championships to incorporate the new lower weight limit for modified touring cars. With a quality entry of top modified drivers Olly Jefferies needed to find a good balance quickly.

On Saturday Olly spent the day at Maritime working on weight distribution, â€œI managed to move the Lipo out a little and after only a few other set up changes, the TC5 felt good and reasonably easy to drive, Maritime is quite a tight track and it punishes mistakes so I worked on making the car easy to driveâ€ Olly said after practice. Cameron McDonald was on hand supporting Olly and the pair were working together trying different set ups on the car.

Fastest time in round one left Olly nearly six seconds clear of the chasing pack which was headed by Elliott Harper and Chris Grainger. Round two and a DNF for Olly but he still remained at the head of the field with his round one time.

In the final Olly made a good start but in building up a lead made a mistake, â€œI was pushing hard to try and break the drivers behind me and I over stepped the mark a little, I retained the lead but decided to just drive for the win after that and not try and stretch the gap too muchâ€

Cameron had problems in qualifying with a rogue set of tyres which put him down in the D final, but he showed his true pace in the final and won comfortably with a time that was worthy of an A final place.

So victory in round one of Carpet Wars for Olly and the TC5 and as we enter a new phase of touring car racing with lower weights, Lipo batteries and no motor limits the TC5 proves it can hold its own with some of the more contemporary newer cars on the market.

While at Maritime Olly also managed to get a small amount of 1:12 running on Saturday in preparation for the next 1:12 national, more news on that in the next round of Olly’s 1:12 blog which will be posted on CML’s site soon.