Serpent Prototype Success In The FSORS

Serpent Prototype Success In The FSORS 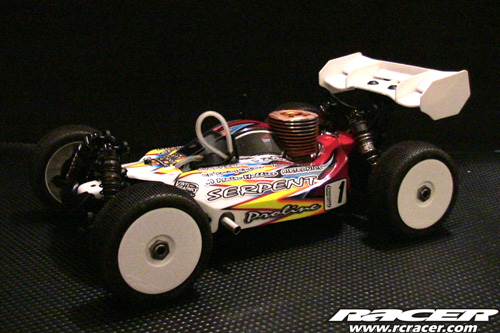 This year’s round three series race was held at Mill’s Pond, January 9th and 10th, in Fort Lauderdale, Florida. The Mill’s crew typically builds a great layout with a fair amount of jumps paired with some tight technical sections. This year they added some depth to the track that would increase our total lap times. The only problem with the race this year was the forecast for rain.

We arrived at the track around noon on Friday. This was a very special day for not only myself, but for the rest of the RC community. I brought out our brand new Serpent S811 prototype buggy. It would not only mark the first time the car would be raced outside of a test track, but also the first time the public would be able to see it in action. With the traction already at high levels, I was sure my buggy would show its true colours to all present.

I readied my car and was set to hit the track. There was quite a spectator group at the track ready to watch the buggy they’d been reading about and anticipating. After a few laps around the track, you could see that my car had an amazing amount of cornering speed. The jump capability was also stellar. I could hear the people in pit lane â€œwowingâ€ at how well the car jumped in the centre of the track- my car was jumping twice as far as anyone else’s was capable. It seemed as if passing the other cars was effortless. I really felt that the car was handling as good as it had in my testing. Most importantly, the buying public was able to get a glimpse of this newborn buggy’s growth potential. After getting a feel for the track and deciding that I had learned the layout, I pulled my car off to head for the pits to evaluate the situation at hand.

Overall, I was extremely satisfied with the performance of the buggy. As I came down the drivers stand, many people came to greet me with smiles. They shook their heads and exclaimed over and over how great my car looked out there. Already, the response was positive. As practice came to a close, rain began to pour down, putting a damper on things. The water was draining off the track fairly well, so we hoped the event wouldn’t end up being cancelled. Because of the rain, practice was cut short on Friday.

We woke up Saturday morning to find that it was still raining. Because of the weather, we didn’t get to run at all on Saturday, however, the Mill’s Pond crew was very determined that we would race on Sunday. After the rain stopped late Saturday evening, they immediately began working on the track, getting it ready for what would hopefully be a Sunday race. 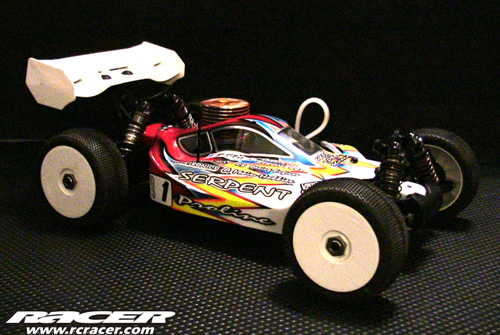 We showed up Sunday morning and racing was nearly underway. The track was very tacky and muddy, and unfortunately I was in the first race. This was what I consider a street sweeper race- the guys who get to race first, get it the worst of it. Although my qualifying run didn’t go the best for me due to accidents, my lap times for that round were close to one second faster than the guy who TQ’d the round. My problem- too many mistakes. Despite that, my car showed its speed. I would just have to wait for the second round, and hopefully a better track condition when the time came.

As the second round approached I was ready, hoping I had chosen the right tyres to do the job. Proline Revolver M3’s were my choice, and I set off on a blistering run. I was faster than the previous TQ, and faster than many of the other top competitors. Unfortunately, due to lap traffic, my run would suffer yet again. Despite the challenges presented, the car still showed it had the capability to Top Qualify.

When qualifying was over, I was fourth on the grid. Not a bad spot, but not exactly what I’d hoped for. Plagued with bad luck, fourth wasn’t a bad place to be starting. As the day went on and the Main Events drew closer and closer, the track was becoming quite slick. This was not a condition I had yet been able to test the car in, so I knew it would be quite a challenge and I was looking forward to seeing what would happen. We lined up on the grid, and were set to go for the Main. The horn sounded and we were offâ€¦but not for long. I was collected in a first turn collision with other vehicles, dropping me to the back of the pack. I also got caught in a multi-car collision not only in the second turn but in the third as well. By the time the first lap was over, I was half a track down but I was not willing to give up, especially this early on in the race.

The Main Time was cut short to 15 minutes because of the rushed schedule on Sunday, so this cut down my chances of a long drawn out Main. I had little time to make a strong come-back. I would have to settle for the best sprint race I could put together. As the race progressed, I slowly picked off one car at a time. Finally, with just two laps to go, I caught the leader. When I passed him, I used the momentum I was carrying to put a jump pass on him. Before he knew what was happening, his comfortable lead turned into second place. The crowd roared! Once I gained the lead, I cruised the last few laps with ease, putting the Serpent S811 Cobra on top as the race came to a close.

In closing, I think the Mill’s Pond crew did an excellent job with getting the track ready for us to race. Their determination was very appreciated by all in attendance. Overall, I was very happy with the performance of my buggy. I still have many things to learn about it, and more testing to do. So far, the durability and performance is easily rated at the top of any of the cars I’ve raced over the last ten years. I believe that when the car comes to production, customers will fully appreciate this vehicle and all that has gone into its design. Now it’s time to move on to a new challenge- to go head to head with last year’s winner Jared Tebo, and top racers Ryan Lutz, and Ryan Maifield at the CRCRC Midwest Nitro Championships.