The pits at Tamworth were buzzing with excitement all day with new chassis and electrical layouts a plenty! 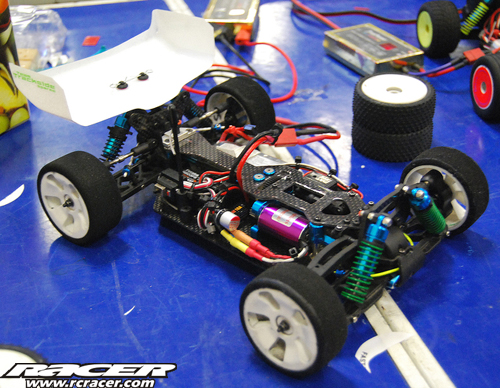 Previous Micro Champion SMD’s Craig Harris made his return to competitive micro racing with his prototype LRP Shark. Craig’s Shark ran a modified slipper clutch and a motor mounting layout similar to the Associated B44 to optimise the weight distribution and handling of the car but with only a few minutes of run time on the new chassis even Craig was unsure as to whether his fettling would reap him any rewards. 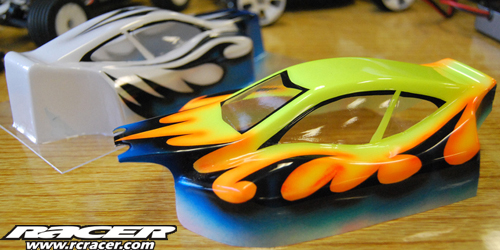 The new Phat Bodies Bolt as seen in the pits

Dan Harding, Section Chairman Cris Oxley and Frogger Product’s Carl Venter had received their new extended Shark chassis’ from Santa over the Christmas period and were keen to get out for practise to see if the extra 20mm that the new chassis offered them would make a difference on the carpet.

Once again EMS Racing’s Danny Conway walked the 2WD qualifying with his â€œ2WDâ€ LRP Shark ST and looked set to wrap up his easily won Championship in the finals.

Thomas Graham and TrakPower’s Craig Harris tussled for 2nd place on the grid throughout the day with Thomas’ homemade 2WD taking the spot in front of Craig’s near standard ZT2. 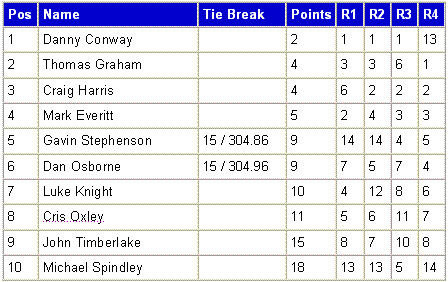 The pressure was on McDonald’s favourite patron, V-Design’s Mark â€œSausage McMuffin and a coffee pleaseâ€ Stiles as he knew full well he needed to bag as many points as possible to ensure that his flying start to the Championship was not in vain. 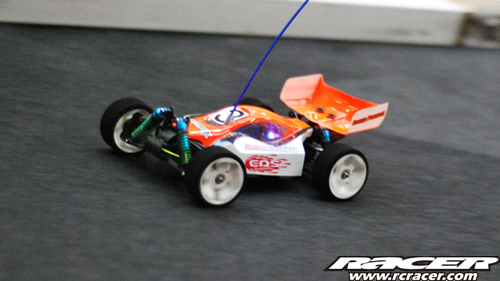 Rippin’ it up on the Tamworth carpet!

With Microtech Racing’s Keith Robertson relishing in the fact that the track was full of additive from an unfortunate on road meeting held the afternoon before, it would be down to whom could cope with the change in grip levels across the track the best.

Starting out on rubber tyres proved beneficial for Trackside Spare’s Craig Harris who seemed to be the only person not suffering for the soaked carpet. With the rest of the field struggling to find lines avoiding the additive it was yet again Mark and Keith at the front end of the grid but this time led by Craig. 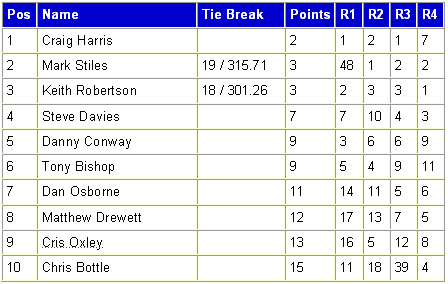 Danny wrapped up the 2WD Championship by taking the 2WD A-final by nearly a clear lap. Thomas cruised home safely in 2nd place with the best part of a 20 second gap to 3rd place Gavin who managed to keep Mark, Dan and Michael at bay. 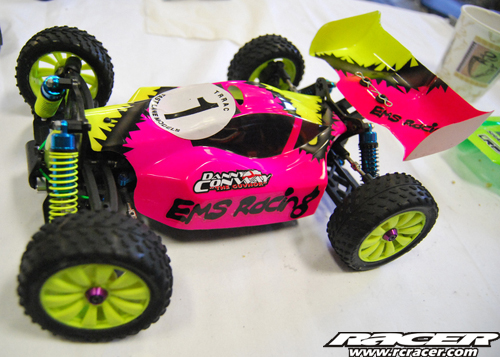 After some drama mid-race Craig limped home in 7th after a strong start, closely followed by Cris who was suffering grip roll problems for the duration of the final. Luke finished 9th with sole Mini-T runner John rounding out the 2WD A-final. 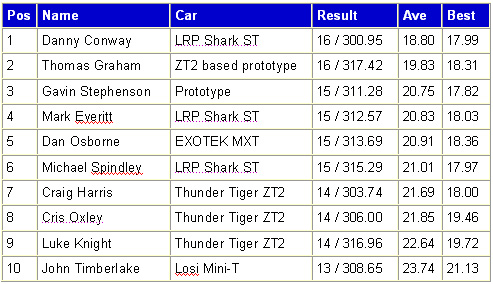 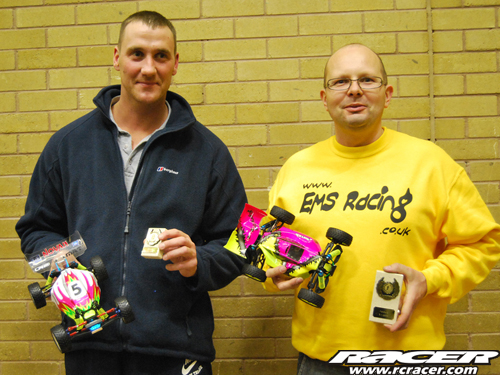 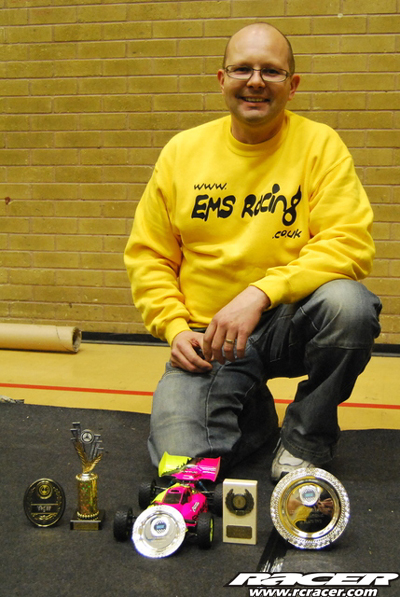 From the very start of the 4WD A-final is was only ever going to be between Craig, Keith and Mark but the question would be; in which order would they finish?

After taking top place in qualifying Craig set off with a point to prove and looking to maximize his start to the Championship before his home round of the Series at Caldicot.

At half way Craig seemed to have settled into his rhythm but all the time Keith was edging ever closer to Craig’s custom Shark and the two started to battle for position as the race started to draw to a close.

With only afew laps remaining Keith had managed to draw out a sizable gap to Craig and Mark who were locked in their own battle whilst trying to get lucky darting in and out of the lapped traffic but at the last corner Mark drifted wide of the apex, the first mistake he had made all day, which allowed Craig enough room to sneak a move in to claim the second place on the podium. 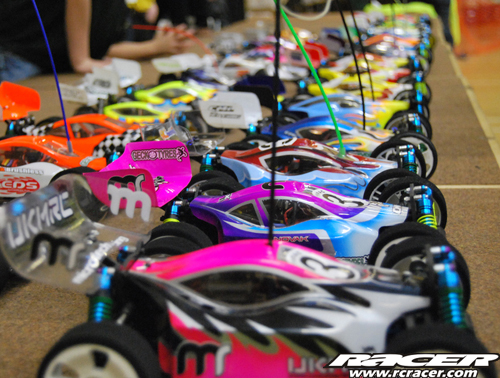 Mid pack Phat Bodies newest signing Steve Davies sailed home in 4th place only 2 seconds in front of the 2WD Champion Danny who in turn was only 0.5secs in front of Chris Bottle! A Hereford sandwich if ever I’ve seen one!

Tony Bishop rounded out the last of the ’17 lappers’ with Matt, Dan and Cris following the pack to finish the A-Final. 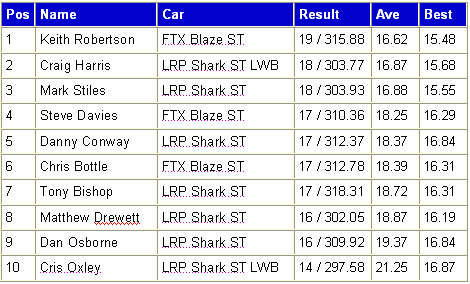 You wouldnt trust your purse with ’em would ya? 4WD A-final top 3. 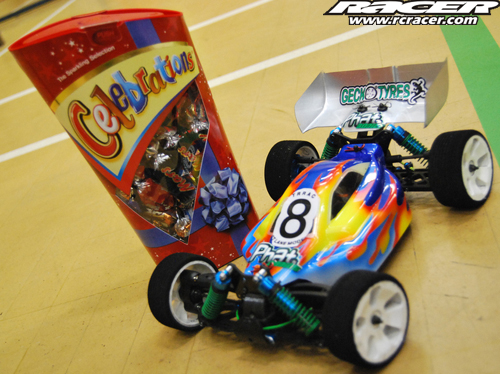 Over the border we go… 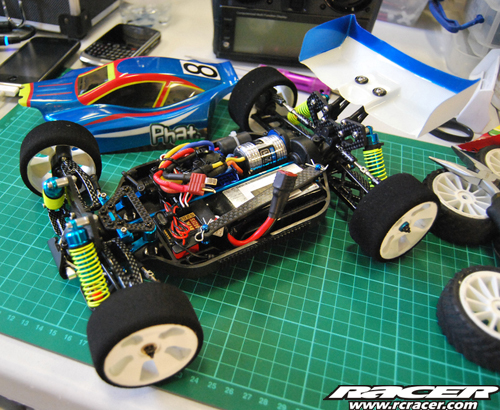 The focus is now onto Round 5 of the Series at Craig Harris’ home club – Caldicot.

With a reputation for being one of the best micro racing clubs in the country for track layouts and features and a favourite hangout for the likes of the Hereford, WORM and Swansea micro racers the event is sure to be one of the highlights of the Series this year!

In the meantime, entries are sure to be flooding in for Caldicot’s Round 5 Micro National so make sure you get yourself over to www.brcamicro.org and enter online!