From Rod to Rat

Converting the Ansmann Hot Rod to a Custom Mad Rat 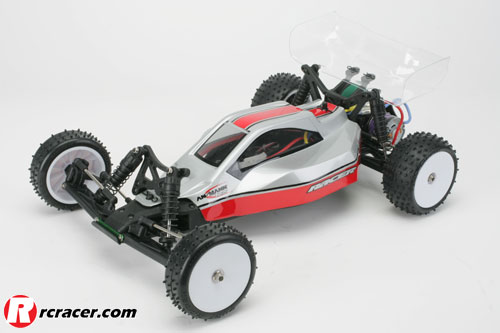 Back in the November 2011 issue of Racer Magazine, we brought you a review of the Ansmann Hot Rod. This model sold very well for Ansmann, as it offered a perfect introduction to radio control vehicles. As the Hot Rod has DNA from the Mad Rat albeit with a 12mm longer chassis, we wondered how easy it would be to reverse engineer the Hot Rod into a club racing buggy.

Why do it you may ask?
Times are tight and more and more people are reducing their spend on new vehicles and with 1:10 off-road scene exploding, it’s not long before Mum and Dad’s pockets are plundered for the next vehicle to keep their young child happy. This conversion allows you the best of both worlds for minimal expense. So to start with, we removed the Hot Rod body and took of the large body posts used to hold the body in place. We then worked out what we would need to make the conversion happen. A quick trip to the local model shop and we had a set of wing mounts from a Mad Rat, a set of wheels and tyres suitable for club racing as well as a Pro-Line BullDog for the extended B4.1 Worlds Kit. The wing mounts simply bolt into place where the original body posts fixed on. The rear wing was cut out and fitted onto the rear wing mounts and the wheels and tyres glued up ready to race.
The body was the trickiest part as a standard Mad Rat shell would probably fit but we wanted a different look to ours so opted for the Pro-Line 2012 BullDog. This was probably the longest bit of the conversion as we worked out where it needed to be trimmed from the original outline for the B4.1. It wasn’t too hard although we found the neck very tight we adjusted the shell by heating the plastic with a heat gun and clamping it on place where we wanted it until the plastic had cooled. Hot plastic can be extremely dangerous so take care if you go down this route. The Tamiya TRF201 body will fit straight on, but we really wanted the cab forward look. 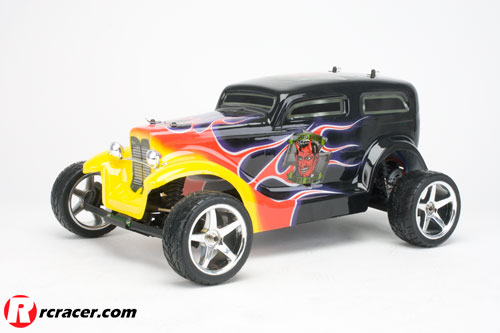 The front of the body located on the original bulkhead pin although this can be fiddly to get to due to the shock tower used on the Hot Rod. You could change this to a Mad Rat tower but then reverting to the Hot Rod for those fun days will take longer. The rear body post is made from a Tamiya TT-01E out of our box of spare parts and this is held in place on the rear shock tower with a plastic washer to help clamp it onto the tower. It can also be left in situ when and if you convert back to the Hot Rod. The standard electronics are perfect for those wanting to try their hand at off road the 21T motor offers plenty of poke and the 2.4GHz radio is also a prerequisite at race track these days.
So there you go two cars with only a quick afternoons fiddling for those that want to get the most out of RC on a budget.

2 Responses to From Rod to Rat