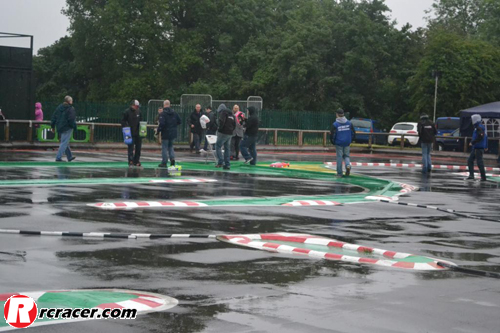 Round two of this year’s Schumacher BTCC Championship was held at the West London Racing Centre track. Having looked at the weather forecast all week, it was going to be a wet day and sure enough when we all turned up at the track, wet it was. At drivers briefing, it was decided that the format for the day would be four rounds of qualifying using the round by round system followed by a final for all.
Round one – with qualifying underway in round one, it was Tony Broad who set the fastest time followed by Daniel Booker, Damian Giddins, Tim Tims and Spencer Jones in the stock class. In super touring it was Schumacher’s Chris Grainger setting the fastest time with Olly Jefferies, Alan Bickerstaff, Andy Murray and Stefan Chodzynski rounding out the top five.
Round two – the positions of the top five remained the same as round one in the stock class however there were a couple of movers in super touring, the first three were as round one with Phil Chambers moving into fourth and Ayrton Anderson into fifth position.
Round three – in the stock class Tony remained on the top spot but Damian managed to set the fastest time and go ahead of Daniel, in fourth place now it was Spencer Jones and Tim Tims fifth. In super touring the top two were as the previous round – Chris and Olly then in third was Kyle Gardner setting the second fastest time in round three – well done Kyle. Fourth was now Alan and Schumacher’s Tim Langdell moved to fifth overall.
Round four – the top three remained the same, however the top two were now tied on points both with two fastest times each, so it went on tie break which was fastest time and this meant that Tony remained in the top position, Damian second, Daniel third, Tim moved back to fourth and Schumacher’s Mark “Muzzy” Musgrove moved up into the top five for the first time. In super touring Chris was where he had been all day at the top but with another good time in round four. Third fastest to go with his fastest time in round three it was Mark Stiles who had moved into the second spot, Olly was now third, Kyle fourth and rounding out the top five was Alan. Bring on the final.

Stock A Final
This final the rain started to take its victims with six cars not making more than six laps and the pole man Tony Broad not even starting, it was second place on the grid Damian Giddins who took a start to flag victory never being challenged once for the whole five minutes. There was a close fought battle for second place with an ever charging Bryan Nortje coming within a second of Tony Watts but was unable to catch him at the five minute limit. 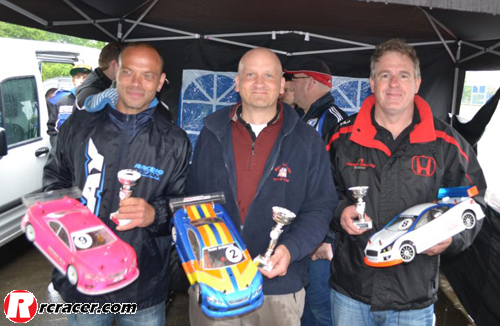 Super Touring A Final
This final saw pole position Chris Grainger with his Schumacher Mi4CXL pull out a four second gap on the first three laps leaving the rest of the field in his wake, he wasn’t challenged for the whole five minutes and looked like he backed off towards the end of the final having such a big lead over second place Mark Stiles. The lake as it could now only be described as, going into the sweeper was causing quite a few problems for many drivers Kyle Gardner came to a halt on lap three and was unable to continue. Olly Jefferies was running in a comfortable third place until lap six where he dropped four seconds to leader Chris on that lap and a further five seconds the lap after, those two laps dropped him down the field so far that he was unable to recover to get back in the top three, however this promoted his team mate Alan Bickerstaff into third position which he held until the end of the final. 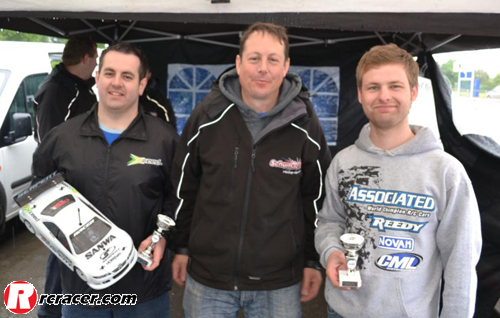 We would like to take this opportunity to thank West London Racing Centre for an excellent run meeting, the catering facility for the excellent food, and also all the committee for their help through the day to try and keep the track in a raceable condition. The next round will be at Halifax on 1 July 2012, we hope to see you all there, spaces are available so please book in at Central Booking here.