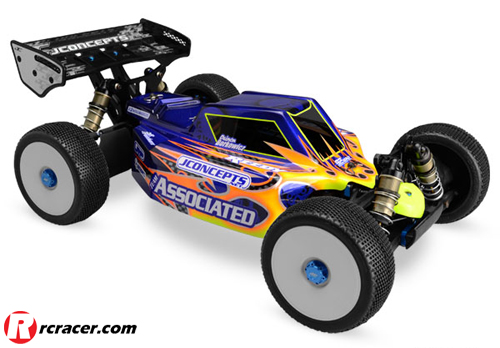 The latest Finnisher body from JConcepts is designed for the Team Associated RC8.2e buggy. It’s a drop fit for the popular vehicle and bears a stunning look with its cab treatment, styling and aggressive personality. Increased windshield angle provides a steady force upfront during mid-flight wind gusts on large jumps. Forward cab placement changes performance/visible bias, which helps steering rotation in low traction corners. The side-pods have a strong and chiseled look, including a recessed area in the rear which allows another option for air-escape. The chassis side-guard to body fit has been tightened up, which helps eliminate large empty voids that contribute to mid-flight directional changes. The area behind the cab has been greatly lowered exposing more of the engine heatsink allowing more heat escape. The V-stepped feature which is a highlighted styling cue of the Finnisher buggy bodies has been incorporated toward the rear and allows an additional area that can be trimmed to allow air-flow through the body.