Team Associated’s Jefferies Takes TQ and the Win at WLRC 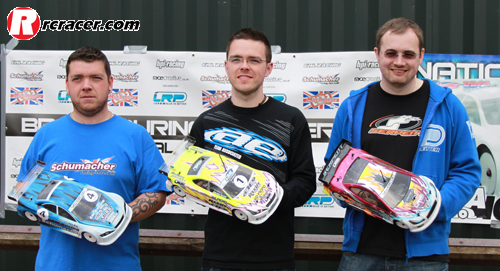 After a qualifying a lowly ninth and salvaging a fifth place finish at round one, Team Associated/Reedy driver Olly Jefferies won round two of the BRCA Touring Car Nationals at West London on 17 June. Olly TQ’d two of the first three qualifying rounds on Saturday and then went quickest in a very close fifth and final round on Sunday to line up on pole position for the A final ahead of Chris Grainger’s Schumacher and the Serpent of Chris Kerswell.
In leg one of the A final Olly had to shoulder some heavy pressure early on until the chasing pack fell away and Olly cruised to the leg win. In leg two Chris Grainger was breathing down Olly’s neck for the first three minutes. Then as the pair entered the fast sweeper Chris put his nose up the inside and Olly eased the door shut. Due to the speed, and the fact they were going through one of the most demanding corners on the National touring car calendar, there was an inevitable clash. Chris waited for Olly to recover but in that time Colin Price had sneaked through to take the win with Olly second. This left Colin needing to win the final leg to take overall victory. Olly took the win in leg three though and with it maximum points for round two of the BRCA National series.

Round three takes place at Halifax in July just before the World Championships in Holland. For full results and information, click here.