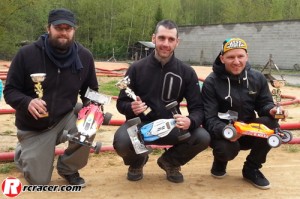 The track at Liege, Belgium is well known for its great clay surface, giant size, and awesome layouts, and the MRCL club did not disappoint for this year’s edition of the annual GP on Sunday April 28. The day started out chilly, then warmed up with just one brief shower mid-way through the program to hold down the dust.
X Factory team driver Bruno “Elvo” Heremans was there bright and early with his brand new X–6 Cubed prototype for some early practice and it paid off. Elvo TQ’d every round of qualifying and ran away with all three legs of the A final, setting fastest lap in every race. Martin Vierin took second with an X–6 Squared.
Heremans allowed another driver to take the X–6 Cubed for a few laps in practice and he described it as “nimble” and “plush” before adding “Because it’s so light, the chassis only really hits the ground when pulling a wheelie. And the steering is something else. So precise.”
Back in the US, X Factory spokesman Chazz added:

“We are working flat out to release the Cubed ASAP. The last shipment of carbon fibre has been shipped to us and should arrive Wednesday. We are machining the aluminium parts now. We still expect to ship the first X–6 Cubes to our Dealer Family later in May.”