Yardy and Martin Reign in the Rain 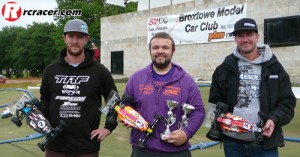 Round four of the BRCA Off-Road Nationals were hosted by Broxtowe Model Car Club in Eastwood, near Nottingham. A new site for the national series saw a challenging all Astroturf track that gave good grip when it was dry. Unfortunately this wasn’t very often as rain showers blighted the weekend, frequently soaking the track during qualifying.
In the 2WD event it was a new name to the top of the list as Tom Yardy took the pole position driving the Centro development car. Joining him on the front row was Lee Martin with the UK début of the new Tamiya mid-motored car, and Neil Cragg next up in third. Championship contender Simon Moss was caught out by the inclement conditions and didn’t make the A final whilst fellow contender Darren Bloomfield also missed out after a marshalling transgression.
In the finals it was all about the top three on the grid and it was honours even with the final result going to count-back. Neil was imperious to take the first leg whilst Lee battled hard to win the second leg, leaving Tom to dominate the final leg and with it the overall victory after setting the fastest time and his first in 2WD. 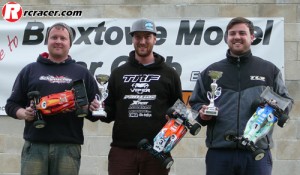 For the 4WD event on Sunday the track was extremely technical and once again it was wet for most the day. On pole position was the Losi XX-4 driven by Darren Bloomfield ahead of Neil Cragg and Lee Martin.
The first two A final legs were taken by Lee Martin, and with it the overall victory which helps keep the championship alive. Darren couldn’t quite hold off for the win, but was happy with second as Simon Moss completed the podium after finally have things go his way with the final leg win.

Look out for a full report in a forthcoming issue of Racer with pictures of all the new items as well as gossip and much more.