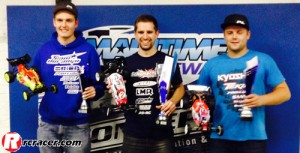 This past weekend saw the 2014 edition of the ever-popular Off-Road Wars hosted by Maritime Raceway. The event has created quite a following over the years with Ian Knight and his team running a great race program and laying as ever, an excellent track. The track was very fast paced, with plenty of well profiled jumps to keep the drivers entertained and the racing close.
The format would see 2WD run on Saturday and 4WD the following day. A single round of practice, four rounds of qualifying and then three leg A finals would decide the winner. Unusually it would be FTD qualifying – a novelty to most drivers now used to the round by round format currently used – a welcome change that requires a slightly different approach to the day.
In 2WD it was Tom Cockerill who was quick off the mark, laying down the quickest times in rounds one, two and three, but with drivers improving every time they hit the track it was all to play for in round four. Ellis Stafford finally found his groove to go top taking TQ from Tom Cockerill, Jörn Neumann and Elliott Boots. The top four were all very close on times so it was set to be some great racing in the finals.
Leg one saw the top four breakaway early, before each driver started to make mistakes. At the end of five minutes it was Elliott who took the win, having driven a mistake free run. Leg two again saw the top four gap the chasers with Ellis leading the pack until just over half distance when the final again turned into a battle of mistakes. Jörn would hold on to take the leg win from David Poulter, and this left a four-way battle going into the third and final leg. The final started as a repeated of the previous two legs, the top four split by nothing over the opening laps until the mistakes crept in. This time Tom got the break leading the final from half distance and set about setting the fastest time as the final result would go down time decider. When all was said and done, Tom took the win from Elliott, his time five seconds quicker than Elliott’s leg one win as Jörn would round out the podium in third. 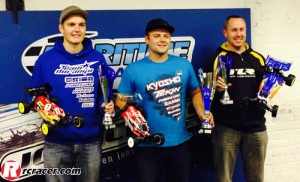 On to Sunday and 4WD that saw Jörn Neumann start off with intent, setting the quickest times in all four qualifying rounds to put his car on pole for the finals. Elliott Boots got it hooked up in the final round of qualifying to line up second, followed by Tom Cockerill and Jack Embling starting fourth. The track layout was slightly different, which allowed the finals to be a little cleaner than the previous day.

Leg one saw an uncharacteristic error from Jörn on the opening lap from which he would never recover. This left Elliott out front to take a comfortable win. Jörn got a much better start to leg two, but only made it until lap three before a mistake. Again, Elliott took the opportunity and lead the leg home, taking the overall win. Elliott chose to run leg three and with Jörn put on an excellent race for the crowd. Jörn took the leg to secure second overall and behind them Ellis came home third to complete the podium.

Congratulations to the Maritime Raceway club and the crew for another excellent meeting.