JConcepts has announced that 10-year-old Malin Karlsen has joined their worldwide race team. The Norwegian has just turned 10 specialises in 1:10 and 1:8 off-road, and really enjoys the fast paced circuits of Astroturf and carpet. The recent winner of the 2015 Swedish 1:10 4WD National series has already received high praise and accolades in Sweden where she routinely takes the top step on the podium in her favourite racing class. While attending the EFRA 1:8 Off-Road European Championships in Sacile, Italy, Malin received an award from EFRA acknowledging her achievement. JConcepts is looking forward to working with Malin and Bent, her father and mechanic, towards future racing goals while representing a host of proud sponsors. Malin will race a full calendar of events during the completion of the 2015 season and into next where she plans to make an even larger splash in her class of specialty, 1:10 off-road. 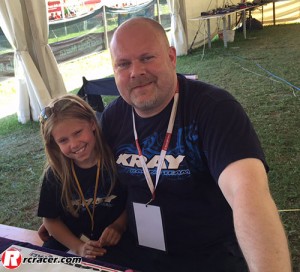 Malin and Bent made the following statement:

“We are extremely happy to be given this opportunity to represent the JConcepts worldwide race team. We are confident that the support provided from such an accomplished manufacturer as JConcepts will be invaluable in Malin reaching her goals. We look forward to be working with the JConcepts racing team and would like to thank Jason and Allison for this opportunity. See you at the race track.”