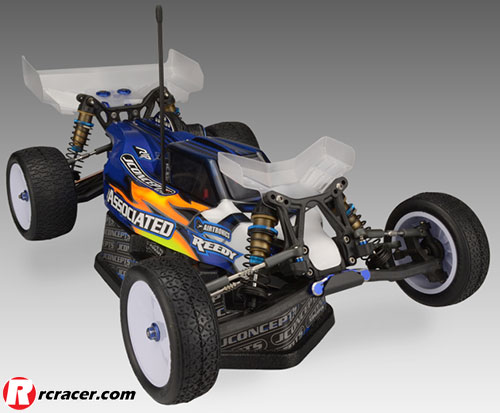 JConcepts Finisher range now includes a line-up of front and rear wing sets for the latest Team Associated 2WD platform, the B5 and B5M. Starting at the back, the rear wing is designed to mount low on the vehicle to ensure the lowest centre of gravity, which is important in high-grip conditions. The lightweight wing features reinforcement ribs to increase stiffness with clearance built into the side plates for rear tyre movement and growth. Cut lines are included as are wing mount dimples for easy fitting.
The front wing features a high-attack design with a Gurney that can be trimmed to suit the conditions. There are also reinforcing ribs to increase lateral stiffness throughout the centre, cut lines for easy trimming and triple wing mount dimples are included for a simple fit to the popular B5 series of vehicles. The leading centre section of the wing has been formed into a unique V-shape to perfectly outline the front shock tower geometry. The front wing comes in four options to suit the B5 and B5M, in both narrow and wide formats and mount above the front shock tower.