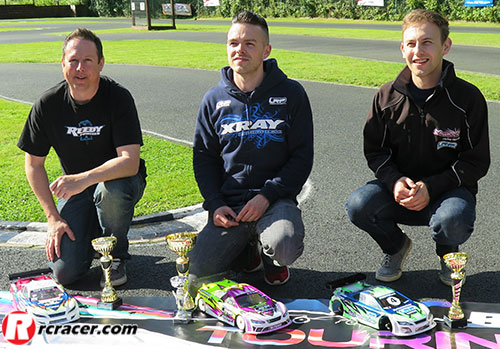 After a poor result by his standards at round two of the BRCA national series, Olly Jefferies bounced back with a dominating performance at round three at Halifax taking TQ and the win Round three of the BRCA series saw 80 plus drivers make the trip north to the fast Halifax track, but speeds were down on previous years as drivers struggled with some very mixed weather conditions over the weekend. Showers and downpours punctuated qualifying to the point where most rounds saw drivers taking wet and dry cars to the start of their runs.
The Xray of Olly Jefferies looked good in both the wet and dry conditions and took TQ. The only person close to Olly’s pace was Kyle Branson and he would line up second with Chris Grainger and Elliott Harper next up in third and fourth. After two legs of the A final the overall win was still up for grabs, but Olly went on to take the overall win with a superb run in the last final that saw a downpour half way through the race. With all the drivers on slicks it was a case of who could go tip toe round and stay on the tarmac, something Olly achieved to perfection 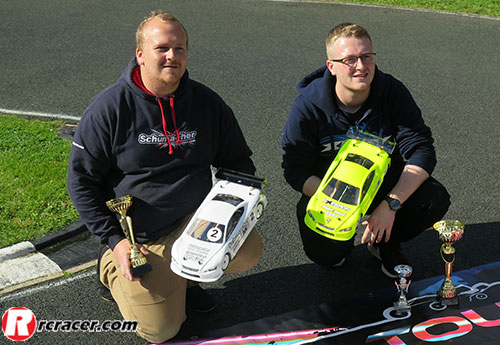 The 13.5T pro stock class had the worst of the weather on Saturday and all the championship contenders found themselves down the order after day one. The pressure was on when the pro stock drivers returned Sunday morning having to make all three of their qualifying runs count. Zak Finlay took TQ and went on to take the win in the A final with three straight wins over James Hart with Lee Price completing the podium. The win means Zak has successfully defended his BRCA national title and was crowned champion for 2016.