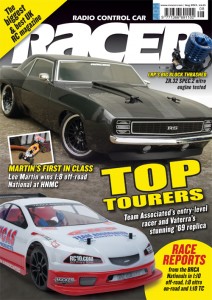 Brushless Upgrade – Justin Noble guides you through the choices you have to consider when upgrading to a brushless motor and speed control set-up.

Cragg Takes Charge – A dominant performance from Team Associated’s factory racer Neil Cragg at Southport saw him take maximum points in both 2WD and 4WD with class drives on both days at the BRCA 1:10 Off-Road Nationals.

A Durango First in TC – Elliott Harper gave the prototype Team Durango DETC410 a notable modified class victory at the 2013 BRCA 1:10 Electric Touring Car National Championships as the series kicked off at Cotswold whilst in stock Zak Finlay who took the TQ and win. Stefan Chodzynski reports with all the news and inside gossip from round one.

Lee’s First At Round One – Herts Nitro Model Club would host the first round of the 2013 BRCA 1:8 Off-Road Nationals and when Elliott Boots failed to make it through to the final. Lee Martin stepped up and would race to a well-deserved first win in the category ahead of former champ Darren Bloomfield.

Masters of Touring Car – A new venue for the annual LRP Touring Car Masters saw some of the best on-road racers do battle but it was German Ronald Völker who took victory with his Blue is Better-equipped Yokomo chassis. Jurgen Lautenbach reports in his regular monthly column as well as looking as some new S10 Blast releases.

Green’s One-Two – Mark Green took wins at the first two National rounds of the BRCA series at Cotswold and Mendip as the defending champion made a great start to his defence with the very latest Novarossi-powered Serpent 977.

Vaterra V100-S 1969 Camaro – When we first caught a glimpse of Vaterra’s new range at Nuremberg earlier this year, the V100-S chassis–based models were an instant draw with their scale looks at attention to detail. We couldn’t wait to spend some time with one and the 1969 Chevrolet Camaro RS was ‘the one’ we wanted first. HPI

Savage XS SS – A micro monster you can build yourself, with all the DNA of an HPI Savage? That’ll be the Savage XS SS edition then. Racer builds up this Rockstar inspired version with serious brushless power.

LRP S10 Twister Truggy – Having fun is the reason why so many of us got involved in the RC hobby and we think that the Twister Truggy from LRP is a great way to start out and put a large smile on your face at the same time.

Tamiya DT-02 Super Fighter GR Violet Racer – This latest offering from Tamiya is aimed at getting newcomers involved in assembling and running their own RC model. One of Racer’s youngest contributors was only too happy to demonstrate this DT-02-based buggy for you.