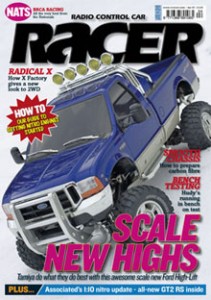 • Local Heroes Shine
Donovan TQs but Crompton wins at the BRCA Rallycross Nationals at Pendle.
• Xray Column
Gas torque from Jurai.
• Regional Finals
Holbeach hosts the off-road finals for the F2 rated racers.
• TC Finals
WLRC hosts the last BRCA round of the touring car series.
• The Power to Supply
We test Nosram’s 14 Amp unit.
• How To…
We guide you through the steps of preparing Carbon Fibre chassis’.
• LRP Go Ai
How the German company looked to Artificial Intelligence for their new speed controllers.
• Firing First Time
A little preparation will make starting a nitro engine a lot easier with our easy to follow guide.
• Jamie Stars
Hong Nor driver Jamie Booth was the star of the show at Shrewsbury with TQ and the win at the rallycross National.
• Bench Testing
We try out Hudy’s new Break-In Bench for running engines in on.
• Team Associated RC10GT2 RS
It may be an RTR kit but with Associated’s racing pedigree, this new gas truck could be your short cut to the race track!
• X Factory X-6
After releasing the X-5 conversion, we were keen to build the American company’s new 2WD with its
radical design.
• Tamiya Ford F-350 High-Lift
This new RC kit from Tamiya has the beauty of a static model but with some neat tricks to keep you entertained.
• Xray XB8TQ
What does the current European Championship and
World Championship TQ chassis have to offer?