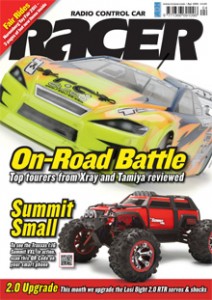 • Nuremberg Eleven
Part one of our in-depth feature looking at all the new kits and accessories on show at the biggest European RC gathering of the year – the Nuremberg Toy Fair.
• Associated RC18B2/T2
The second generation of RC18 models is a true two-in-one with the box including all the parts required to construct it up in either buggy or stadium truck format. Two body sets and different wheels are just the main items as Associated give the platform an all-new look with a belt-drive transmission and sealed drivetrain to improve the durability with LiPo and brushless technology.
• Xray T3’11
New for 2011 is Xray’s T3’11 evolution touring car model. The changes revolve around the adoption of LiPo battery technology with an all-new narrow chassis, centrally positioned steering system, revised chassis layout and new top deck design. We put the new model through its paces at the Moto Arena facility and find out just how good Juraj Hudy’s latest creation handles with our tester behind the sticks.
• Traxxas 1:16 Summit VXL
The latest Summit model is a 1:16 scale version complete with powerful brushless set-up and ready for LiPo. Designed with a sealed drivetrain and waterproof components, the RTR model has the capability to run in almost any conditions as we proved when we tested the awesome little Traxxas model.
• LRP S10 Blast MT RTR
Using their proven 1:10 scale platform as a basis, the S10 Blast MT is a Ready-To-Run entry-level electric monster truck designed for the first time buyer with everything required for operation in the big blue box. As the name suggested, we had a blast running the truck and you can read our full review in this issue.
• Tamiya TR417
The 417 is Tamiya latest Factory Racing chassis and is the car that was developed over the 2010 season that saw the company retain its grip on the World Championship trophy. Tweaks to cater for the demands of LiPo technology are included as well as many other fine adjustments to ensure that the Japanese manufacturer stays at the sharp end of touring car competition.
• UK and USA
Lee Martin’s monthly round up sees him compete on carpet and dirt as his 2011 racing season begins in earnest.
• Elliott Blows Them Away
Another 1:12 National and more TQs and wins for CRC/Speed Passion driver Elliott Harper.
• Last Race Decider
The BRCA 1:10 TC Modified National title may have already been decided but the final round at West London would see the Stock class go right down to the final race of the series.
• Schumacher Mi1
The Mi1 harks back to Schumacher’s early days in touring car as the company aims to offer the first-time buyer a competitive introduction into touring car without the high price tag. Using common components where possible in the design, the Mi1 is LiPo friendly and is capable of handling the power of a brushless system at a price that is attractive to both parents and the younger racer.
• LRP Column
New engines, re-blended fuel and a trip to the biggest race of the year in Thailand for LRP’s Jurgen Lautenbach.
• Cragg Gets Lucky
For once this year, Neil Cragg enjoyed a little good fortune as his competition fell by the wayside on his way to victory at the final BRCA 1:8 National in the 2010 series.
• Final Upgrades
In the second and final part of our series, we replace the standard servos for some high-performance Spektrum versions and give the shocks a tweak too.
• Xray Column
As Juraj Hudy shows off the RX8 at the Toy Fair, he relives the last month in the life of an RC designer.
• Losi XXX-SCT RTR
Although the XXX-SCT comes as an RTR, this short course model has top-end competition heritage and so the design will ensure excellent handling. The standard package ensures a good balance of run time and performance making it ideal for the first time buyer, all wrapped up in a Ready Lift pre-painted body design that gives it a true replica look.