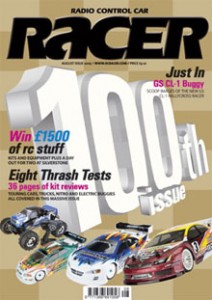 • Storm Chaser – GS have announced the successor to their Storm rallycross buggy. We give you a look the latest car, the CL-1

• 100 Not Out – Racer’s celebrates its centenary with the publication of this, the 100th issue. We take a look back at some of the things that have happened during the past years.

• Cragg Continues Doubling Up – Neil Cragg continued where he left off at Tiverton with another double win in the BRCA 1:10 Off-Road series at Kidderminster.

• Andy Gets Moore from Stafford– Hot Bodies driver Andy Moore gives the Cyclone a debut win in the BRCA Touring Car National at Stafford and all the action from the Stock series at Barham.

• Green Snakes Halifax Win – Serpent cars took the top two steps at the latest round of the BRCA 1:10 Nitro Championships at Halifax courtesy of Mark Green and Steve Brown.

• Corally Challenger – Corally’s RDX touring car had a dream debut in the BRCA National series at Aldershot, taking TQ and the win in the hands of Glenn Doman. Want to see why this car is a winner? Then read our review.

• David Does Droitwich – Nitro Models’ David Crompton returns to his winning ways with his Crono at Droitwich, the latest round of the BRCA Rallycross series.

• Back to Belts – Yokomo are one of the manufacturers that have gone back to belt drive for their latest touring car challenger. Check out our review of the new MR-4TC BD for the Racer verdict.

• Still Savage – HPI Racing’s Savage is one of the World’s most popular monster trucks. Here’s the latest evolution in the form of the 3.5.

• X-Rated – Racer checks out a single belt conversion kit for the XX-4 made by US company X Factory, dubbed the X-5.

• Further Evolution – Tamiya’s TB Evolution IV MS is the manufacturers latest car to bear the MS moniker. We take a look at the new shaft drive tourer from Japan.

• Worlds Winner – The Mugen MBX-5 that won the World Championships is finally available in Prospec form and we tell you all there is to know about the winning machine.