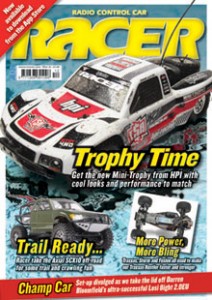 • Northern Rules
Danny McGee and Tom Cockerill made it two new winners in the respective classes as the BRCA 1:10 Off-Road series hit the seaside town of Southport.
• Jonny’s Back
After some time away from the touring car National scene, Jonny Bowden returned for Aldershot in Pro Stock and showed them all that he is a force to be reckoned with.
• Xray Column
With another two ROAR wins, Xray notched up their total of US titles to 30, as Juraj Hudy looks back on the company’s busiest summer ever.
• Boots beats The Master
Young Elliott Boots put one over fellow Mugen/RB driver and pole sitter Dave Crompton when the 1:8 off-road National Championship returned to Pendle.
• Return of the Rustler
After Tom Stacey re-lived his RC memories with the latest version of Traxxas’ entry-level Rustler, this month he gets to equip it with some upgrades to improve handling and performance.
• Under the Skin
Racer takes an in-depth look at Darren Bloomfield’s National Championship-winning Losi 8ight 2.EU.
• LRP Column
This month, CEO of LRP Electronic Jurgen Lautenbach reflects on the 1:8 off-road European Championships and discusses the specs of the latest charger, the Pulsar Touch.
• HPI Mini-Trophy
A closer relation to HPI’s Baja 5T than their Trophy truggy, the Mini-Trophy RTR presents an innovative and true-to-scale design in an easy to use and fun RTR package.
• Tamiya Holiday Buggy
The Holiday Buggy is Tamiya’s latest re-release ad follows the Buggy Champ and Sand Scorcher that were based on their original chassis. The new Holiday Buggy though features all the looks of the original, on a modern chassis.
• Losi 8ight 2.0 RTR
With its oversize engine and pull start set-up, Losi’s first RTR buggy was arguably aimed at the recreational user. But things have changed and with the success of the 2.0 model, their new 2.0 RTR is much more race ready with an impressive spec to justify the investment.
• Axial SCX10 Honcho TR
Axial are the name in crawlers at the moment and with scale crawlers becoming hugely popular, they have taken the SCX10 chassis and made it even better. This month we get to put the Honcho Trail Ready version to the test.
• Schumacher CAT SXII
Here at Racer, we loved the CAT SX that we reviewed and raced successfully for over two years. But there was always a couple of areas that we felt could be improved upon. So has Schumacher answered our prayers with the SXII?