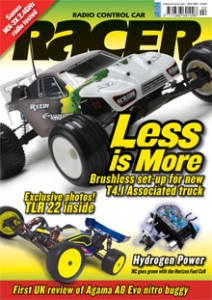 • Hydrogen Power
We take a look at one of the potential future power sources for RC.
• Exclusive – TLR 22
Racer travelled to Horizon Hobby UK for an exclusive hands-on with the new 2WD buggy.
• Xray Column
Juraj Hudy goes back to his roots with the announcement of his 1:8 on0-rpad chassis and some pictures of how he got started in the industry
• Harper Just Misses Crewe Cut
With LiPo batteries the norm for 1:12 cars this season, the Crewe club opted to tighten up their track for their National round as Elliott Harper dominated right up until the last race of the day.
• LRP Column
It’s all about the chargers this month as we get a history lesson from Jurgen Lautenbach and how the range has developed over the years.
• The X Factor
The new MX-3X radio from Sanwa has all the performance specifications of its more expensive M11X relation but at a price that will have much wider appeal.
• Kev Lee Shows No Mercy
With some five drivers in with a mathematical chance of claiming the 2010 BRCA 2WD National Championships, the final round hosted by Stotfold was sure to see some fireworks.
• Wood Secures National Hat Trick
The final three rounds of this year’s BRCA 1:8 On-Road National Championship saw Serpent’s Kyle Branson in fine form but it was team mate Tim Wood whose consistency ensured he retained his title
• 8ight 2.0 – Take 2
After a successful outing with our Losi 8ight 2.0 RTR as part of the review in our December 2010 issue, we decided to run a series of articles on choosing sensible upgrade parts. Focussing on key areas, we chose wisely to try and make the greatest improvements in performance.
• Agama A8 Evo
The Agama is designed from the ground up to incorporate the best features from all the currently available buggies on the market. The buggy is imported by Nemo Racing in the UK and France, it has been in the hands of Daniel Vega for a full season and Jon Hazlewood for half a season with some promising results.
• Associated RC10T4.1 RTR Brushless
Making the most of the advances in technology, the new T4.1 Brushless RTR includes a powerful motor and LiPo compatible speed controller to ensure that this truck is capable on the track as well as off it.
• Xray X10 Link
In 2009 Xray launched the first in the its series of 1:10 scale pan car kits, but a year in RC sport is a long time and for 2010 Xray have reworked the design for the new style battery technology.
• Losi Mini Sprint RTR
Sometimes, life throws you a curve ball. At first glance, Losi’s new Mini Sprint car can almost be dismissed as being little more than just another American biased mini marvel that has little relevance over here in the UK, but having spent a few weeks with it, there’s no denying that it’s appeal has grown and it has certainly turned heads wherever it’s been taken.
• HPI Savage Flux 2350 RTR
The venerable HPI E-Savage monster truck is back with a slightly sharper set-up and a more attractive price. We see if this leaner Savage has what it takes…
• Tamiya FF03 Castrol Honda Civic VTi
Tamiya’s original FF01 and FF02 chassis were a popular class back in the heyday of scale touring car racing. Fuelled by a resurgence in front-wheel-drive mini racing, Tamiya has released a brand new model…