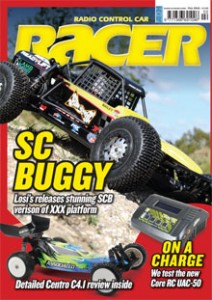 • Cragg’s Championship
Southport hosted the final round of the BRCA 1:10 Off-Road National series and a fitting end for the season as Neil Cragg took two wins and the 2WD title.
• Fifty For Sixty
The new Core RC UAC-50 charger is a neat little unit that is perfect for the racer, all for under £60.
• LRP Come Fly With Me
German giants launch their a range of electric planes as well as a new power supply and pull-start nitro engine in this month’s column.
• Back to Winning Ways
David Spashett returned to the 1:12 racing scene at the first of the BRCA Nationals and was victorious in Stock as the series headed to Ardent.
• Germany On A Swiss Roll
Basel in Switzerland hosted of the 2011 Tamiya European Finals after five years of Germany doing the honours. Racer’s Marcus Askell and Shaun Taylor made the road trip across Europe to represent the UK and write a little report too.
• Ayrton and Andy – Awesome at Aldershot
Hot Bodies wrapped up both Pro Stock and Modified titles in the BRCA TC Nationals when Ayrton Anderson and Andy Moore took the respective wins at Aldershot.
• Talking Japanese
Our resident TRF columnist Lee Martin makes his first trip to Japan and a tour of the Tamiya factory and some testing at the famous Yatabe Arena.
• Serpent’s Success in the South
Rounds five and six of the 1:8 on-road National Championship travelled to Adur near Brighton and Brookland in Kent. With Serpent’s Kyle Branson taking both wins, he placed one hand on the 2011 trophy.
• Thunder Tiger KT8 RTR
As we all know karting is one of the most exciting, adrenalin pumping sports you can do on four wheels so when Amerang offered Racer the new RTR version of the Thunder Tiger KT8 to test, we just couldn’t get our hands on it quick enough.
• Losi XXX-SCB RTR
Using the proven XXX Short Course Truck platform as a base, Losi’s new Short Course Buggy (SCB) is a cool addition to their range of scale replicas with its multi-piece body and stunning looks. Whether on or off the track, the new XXX-SCB is a true head turner.
• Tamiya FF-03 Honda CR-Z
The original FF-01 was introduced in 1993 utilising the popular TA-02 Chassis, this was then followed by the FF-02 using the M Chassis ethos, since then the FF arm of Tamiya had fallen deathly silent. After recording two great hits for Tamiya they have awoken an unleashed their difficult third album, the FF-03. Equipped with Honda’s CR-Z Hybrid body, Racer checks out Tamiya’s electric version.
• Centro C4.1
After the C4.1 dominance in the 2WD class during the 2011 National series, the production version was eagerly awaited so Racer is pleased to bring you the first UK review of Centro’s conversion for the Associated B4.1 chassis.
• HPI Savage X 4.6 RTR
Whilst retaining the Savage’s proven design, the latest evolution features new look graphics and waterproof capability as HPI updates the classic Savage X 4.6 for 2012.
• Electrix RC Boost RTR
The Boost is great model as a 2WD entry-level racer or for the first time buyer getting into RC. Supplied as an RTR, the comprehensive package comes with everything you need to get started at a very attractive price.
• FTX Vantage RTR
With 4WD, a LiPo battery, brushless motor and 2.4GHz radio, the FTX Vantage is highly desirable and at under £200 in RTR form, it’s bank manager friendly too. Racer gets the buggy ready to race and hits the track, putting the Vantage through its paces against some tough competition.