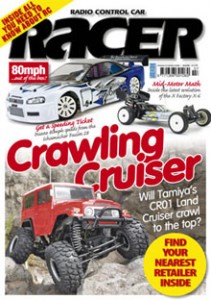 • Factory X Factory
We interview X Factory team driver Ellis Stafford about the X-6.
• Masters of TC
All the news and info from this year’s awesome LRP TC Masters race in Germany.
• The Choice of Champions
Racer looks at what the Much- More Racing range has to offer.
• Alsop Powers to First Win
A controlled drive from HoBao’s Graham Alsop saw him claim his maiden win at the first BRCA Rallycross National of 2008.
• Xray Column
Juraj Hudy looks forwards to the Worlds.
• LRP Column
Race news from LRP after the TC Masters and 1:12 European Championships.
• Making the Mini Faster
We upgrade the Mini-LST chassis using Dynamite power and a Losi slipper clutch.
• Worksop Winners
Who won at the BRCA Off-Road Indoor Finals?
• Drake’s Second Coming
Two Neo races and two wins for Losi’s Adam Drake.
• Associated MGT 8.0
Using the MGT as a base, the new version is equipped with a huge 8cc engine, XP3D radio, Pro-Start starting system and a two-speed with reverse. Phil McMahon was chosen to test out Associated’s biggest truck to date.
• Schumacher Fusion 28
This is the fastest RTR we have ever driven with a top speed of some 80mph. Need we say more?
• Tamiya CR01 Land Cruiser
Our cover star is the Japanese giant’s first rock crawler chassis and we raced to get it inside this issue.
• Hot Bodies Cyclone 12
The latest chassis to bear the Cyclone name is the 12 and is the car that is driven by RC superstars Rheinard, Moore and Hara in the 1:12 on-road class. But is it any good for our test pilot?