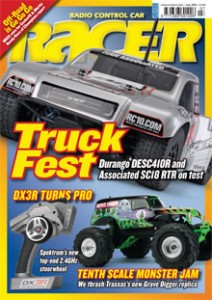 • LRP Column
The indoor European Championships for touring car and the European Championships in France for 1:12 were the ideal venues for LRP to showcase their latest products.
• DX3R Goes Pro
The DX3R radio was the choice of the competition driver in the Spektrum range until they released the Pro. With a greater model memory, revised ergonomics, backlit screen and the ability to update firmware via SD card, this is the new must-have handset.
• Champions Confirmed at Chesterfield
Andy Griffiths and Mark Stiles took the wins at the final round of the 2010-11 BRCA 1:12 National Championships held at Chesterfield with the former wrapping up the titles in both Stock and Open Modified.
• Lee Martin Diary
Pro racer Lee Martin reports in this month with news of his latest travels and races, domestically and internationally.
• Success at Stotfold
Making amends for not winning at the last round of 2010, the defending champions got off to a great start at Stotfold and round one of the BRCA 1:10 Off-Road National Championship.
• Reedy Race Returns
Our new roving reporter Neil Round travels out to the first Reedy Race of Champions in 1:10 off-road for many years.
• Xray Column
Juraj Hudy reports in from another busy month and brings our readers up to date with what’s happening at Team Xray.
• Traxxas Grave Digger
Based on the Stampede monster truck chassis, the Grave Digger is just one of the new fully licensed Monster Jam replicas from Traxxas. With rear-wheel-drive, huge ground clearance and high-torque 550-size motors, the 1:10 models are great scale versions of the trucks that are so massively popular in the USA.
• Losi 1:24 Trail Trekker
Losi’s micro 4×4 scale Trail Trekker encompasses everything that scalers have been doing to the standard version but now in a Ready-To-Run format. Debuted at the Nuremberg Toy Fair, our expert team failed to miss the new addition and were first on the list when samples were received in the UK.
• Team Durango DESC410R
Using the proven DEX410 buggy as a platform, Team Durango’s new DESC410R is a 4WD short course truck designed to win. And despite this being the cost-effective R version, its clear that the performance is mightily impressive.
• HPI Sprint 2 Drift RTR
HPI’s popular Sprint 2 chassis has been updated with more features and a fantastic looking Camaro body in a trick matt black finish to create one very impressive looking RTR drifter.
• Tamiya M06 Pro
The Tamiya M06 Pro is a mini-sized chassis but with a rear-wheel-drive set-up that will compete in a class that is dominated by front-wheel-drive machines.
• Associated SC18 RTR
Based around Associated’s all-new 1:18 chassis layout, the SC18 RTR contains the very latest in brushless technology to make it very fast and lots of fun. The good looking truck uses a moulded chassis, 4WD transmission and oil-filled shocks to ensure it has the performance to match its cute image.