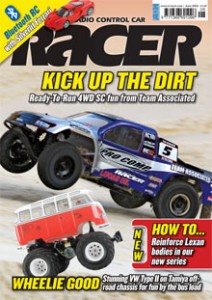 • Lee Goes Continental
From the UK, to Belgium and then the USA for TRF’s Lee Martin and his racing exploits.
• Lexan Protection
Justin Noble’s new series of How To articles kicks off with taping a body shell.
• Jörn’s Double Delight
Two wins from two and Jörn Neumann at the Off-Road Wars held at Maritime Raceway.
• Olly Crowned Champ
Two wins for Olly Jefferies saw him wrap up the BRCA 1:12 Modified Championship and place one hand on the Stock title.
• A New Generation
TLR’s new Gen III radio tray made the perfect platform for Spektrum’s latest High Voltage servos.
• Straight as an Arrow
We put the Arrow Racing GTR.21 budget-priced engine to the test.
• A Blue Ferrari
Silverlit launch their Bluetooth-controlled Ferrari Enzo and we got one to try out
• Inside and Out
After enjoying plenty of success in 1:12, this month Olly Jefferies picks up his TC6.1 for some testing with a 10.5T motor.
• Red Option
Tresrey have released a whole raft of upgrades for the Team Durango buggies so we thought we would take a look at the most important ones.
• Fair Trade
LRP’s CEO reflects on new releases at the Nuremberg Toy Fair.
• Type II Heads Off Road
Tamiya’s new VW Type II bus is wheelie good.
• The Letterman Show
HPI’s Flux-powered Sprint 2 is the talk of the town.
• SC10 4×4 Goes RTR
We take the Team Associated short course for some serious abuse in the sand.
• Van and Deliver
This van-styled micro truck will get you into RC for under £75.
• On the Attack
Tamiya re-released FAV makes life easy with this XB Pro version.
• Trophy on Parade
Updated for the new year, the HPI Trophy truck gets a makeover for the summer.