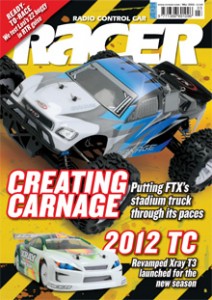 • King Kyle in 1:8
As the 2011 season wrapped up, a new champion in the form of Kyle Branson was crowned. Andy North reports on the final three rounds of the season.
• Stiles Sneaks Serpent Win
Running the new S120-LT, Mark Stiles held off the challenge from Olly Jefferies to win the BRCA 1:12 National in stock, but it was the latter who dominated modified at Hereford.
• LRP’s Successful Licence Application
After planes last month, the March issue sees Jurgen Lautenbach spreading the news of a pair of Mercedes-Benz DTM licenced replicas with two Scots at the wheel.
• Asian TC Is Go
The ATS Pilot Race kicked off at the Yatabe Arena and it was Germany’s Ronald Völker who gave the Japanese manufacturer Yokomo a home win.
• New Year, Lots of Changes
Racer contributor Lee Martin brings us up to date with what has happened on and off the track in recent months and the results of a trip to Tamiya in Japan.
• Production and Prototype
Along with an update of how the Centro C4.1 has performed on track, we also have an insight into Neil Cragg’s BRCA National Championship-winning prototype from the 2011 series.
• The Boat That Joe Built
As Joe Brown enjoyed his time on the water with ProBoat’s WidowMaker 22 so much, he invested in some upgrades for improved durability and to make it more suited to his personal demands.
• Its Twins!
If you run multiple classes on the same race day, having more than one charger can be a pain, so how about two in one? Team Orion has the answer with the Advantage TwinSpec.
• Xray T3’2012
Updated for the 2012 season, we run through the changes that new designer Martin Hudy has made to Xray’s top end touring car chassis.
• Tamiya TA06 Pro
Combining shaft and belt drive, we analyse the pros and cons of the system that Tamiya has integrated into the latest TA range of chassis’, the 06.
• HPI Bullet MT 3.0
HPI has refreshed the Bullet MT 3.0 and now with an improved spec that boasts a waterproof battery compartment, waterproof servos and rain cover for the air filter.
• Serpent S120-LT
On the latest 1:12 chassis from Serpent, the design is updated for the use of LiPo batteries with the Link-Tube set-up and a new radio layout.
• FTX Carnage
Priced at a under £110, the Carnage package from FTX offers great value for money especially when you consider this is a true RTR with 4WD as well as a battery and slow charger all included as standard.
• Losi 22 RTR
The 22 from Losi is the RTR version of the TLR version and unsurprisingly is more ready-to-race than ready-to-run! With its ready-built format and racetrack focus, we hit a local club race for some fun.
• LRP S10 Blast SC
The latest model to be based on the proven S10 Blast platform is the SC. With 4WD, oil-filled shocks and many other key features, this RTR is more than just a low-spec entry-level machine