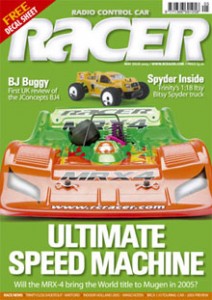 • Show Stoppers – All the latest news and products from the Nuremberg Toy Fair.

• Mugen’s Tamac Terror – Racer gives you the low down on Mugen’s latest 1:8 circuit racer, the MRX-4.

• Pick a Winner – Check out who’s doing what and where with our BRCA National Touring Car preview.

• Grainger the Shootout King – We report on the action from the two-day Trinity/Losi Shootout at DMS Racing in Watford.

• Euro Tamiya Title Winners – See who won the trips to Japan in the Tamiya Euro Finals from Holland.

• Jackson’s Dutch Triumph – A large British contingent went to the Indoor Holland rallycross meeting resulting in a win for Karl Jackson and Mugen.

• Crono-graphic Precision – Racer reviews the latest ride that multiple national rallycross champion, David Crompton will be gunning for glory with in 2005.