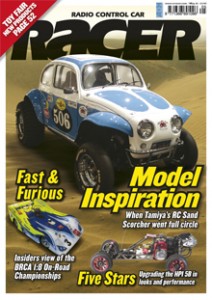 • Full-Size Scorcher
How one German Tamiya fanatic made his own 1:1 Sand Scorcher.
• FTX Outrage RTR
It may be outrageous but it certainly doesn’t cost a fortune – the latest FTX nitro buggy comes in at a bargain basement price.
• Kyosho MP9
Not only have Kyosho released a new version of their Inferno platform and it now also comes in at a more competitive price too…
• LRP Column
The racing year has already begun in earnest as the LRP Race team has gotten together to travel to Denmark and Belgium for the DHI Cup and Nitromania X races.
• Moss and Schumacher
the perfect combination – Despite not having raced the new Schumacher Cougar SV in anger before, this didn’t faze Simon Moss as he raced to a clean sweep of wins in 2WD as the first-ever British Winter Open Championship took place at Worksop.
• Fast and Furious
Racer is pleased to announce that we will be covering this year’s BRCA 1:8 On-Road Nationals, along with helpful guides on set-up. In the first instalment, we preview the 2010 season.
• Hop To It
We take a quick look at LRP’s new 2.4GHz steerwheel radio.
• Hot Bodies Ve8
The Ve8 is a full-on competition kit, based on the World Championship-winning nitro D8, but this one is electric powered. Racer puts it to the test…
• 7A is Where It’s At
For the RC enthusiast, hall 7A is the place to be in early February for all the latest products on show from the industry. Racer brings you the first of our reports from the Nuremberg Toy Fair.
• Harper Wins for CRC
The cream of the UK’s 1:12 racers made the trip down to Devon for round four of the BRCA Nationals at Plymouth.
• Xray Column
From Germany to Thailand, Juraj’s busy schedule moves from one continent to another.
• Integy Inspired
Racer rips apart their long-term test HPI Baja 5B 2.0 to hop it up with the latest parts from Integy and also add a fresh lick of paint and new boots…
• Losi Night Crawler
Losi tweak their competition-spec crawler for the RTR market with some cool features including LED lights.