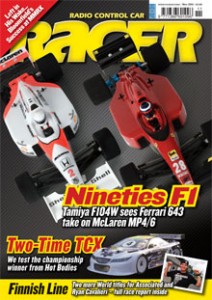 • Moore Wins With Ayrton
Despite the tricky conditions, it was the Hot Bodies duo of Andy Moore and Ayrton Anderson who took the respective wins on a challenging weekend at the BRCA National that took place at Halifax.
• LRP Column
LRP founder Jurgen Lautenbach looks back over 20 years when he was a racer himself and manufactured his first LRP product.
• Take Two
After previously winning his first two World titles in Italy and the USA, Ryan Cavalieri did the double by taking two more wins in Finland despite not being on pole position for either class.
• Bloomfield Leaves them in his Wake
TLR’s Darren Bloomfield pulled off an MMRX master class by dominating qualifying and the final at the venue and proving once again, he is the benchmark for everyone else to aspire to.
• Germany, Southport and France
A last minute entry for the Lee at the EFRA 1:8 Off-Road European Championships adds to an already busy month for the TRF driver what with his 1:10 commitments in the UK and overseas.
• Race to the Line
Neil Cragg placed one hand on the 2WD championship driving the Centro C4.1 whilst in 4WD, Tamiya still won but this time it was with Ellis Stafford.
• Snake Bite
Serpent’s S411 gets the Racer thrash test treatment as we build the Dutch company’s new touring car. Featuring an ultra low centre of gravity, optimised weight distribution, high performance geometry and top quality materials throughout, the S411 looks like being right up there with the best in terms of performance, reliability and quality.
• One Hot Rod
Ansmann gives the RC community a new look with their RTR Hot Rod. Based on the proven Mad Rat platform, the Hot Rod features an old school body with chrome look rims, all at a price that makes it perfect for the first time buyer.
• Axial’s Ghostly Wraith
Axial are on top of the game when it comes to the off-road crawler scene, Ground-breaking designs and pushing the boundaries back are what the Axial team strive for. This latest offering bridges the gap between scale truck and crawler and is based around an actual rock racer competing today.
• Double Top
The new Hot Bodies TCX has already proven itself in the hands of Andy Moore and Ayrton Anderson who won the BRCA National Championships in 2011. Racer gets their hands on a TCX for a full review including a detailed build analysis and track test.
• Touring Car Blast
The S10 Blast TC is an ideal platform for starting out in racing. With the possibility of upgrades, the car has the possibility to grow with racing requirements and features CVDs in front, adjustable turnbuckles, anti-roll bars front and rear and big bore shocks as standard. Racer headed out to a local club where we could give the Blast a proper shakedown.
• Old School F1
Tamiya has released two new models in the form of the Ferrari 643 and McLaren MP4/6. Based on the F104W chassis, two of Tamiya’s classic F1 cars from the early 1990s have been brought back with updated chassis and modern parts compatibility.