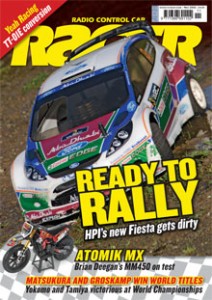 • Yeah Its Blue
We fit a Yeah Racing upgrade kit to one of Tamiya TT-01E chassis’ and examine the obvious benefits that this bling package of blue alloy offers.
• Flow Testing
LRP attended the IFMAR 1:12/1:10 TC World Championships in the Netherlands and showed off their new products in their team drivers cars including the Flow speed control range as well as the Quadra Competition V.1, a new all-round charger.
• Xray Column
The latest news from the Xray team as Jurai Hudy, the chief designer brings us up to date with the goings on from their factory in Slovakia as well as at race tracks around the world.
• Spraying Plastic Fantastic
This month our How To guide focuses on the process of painting a hard body. There are a number of stages required to get the best possible finish and we offer you some helpful tips to make this job a whole lot easier.
• OJ at the WC
Racer contributor and on-road star Olly Jefferies headed to the World Championships with high hopes in the 1:12 and touring car classes. In this month’s column, Olly reports back on the highs and lows.
• Matsukura’s Third as Groskamp Wins First
The bi-annual IFMAR World Championships for 1:12 scale and ISTC (touring car) took place at Heemstede in the Netherlands. Whilst Naoto Matsukura won for the third time in a row in 1:12, it was home grown star Jille Groskamp who took victory. Read the full, inside story starting on page 76.
• Boot Champ
A third win in as many rounds saw Kyosho driver Elliott Boots wrap up the 2012 BRCA 1:8 Off-Road National title as the series hit the Herts club located at Westmill Farm near Ware.
• Neal is King of Mendip
The latest rounds of the 1:8 Circuit National Champs took place at Adur and Mendip and whilst former champ Tim Wood took the win at round three, it was Neal King who took his first National victory at Mendip.
• First of Many…
Silverstone hosted their first full National round of the BRCA 1:10 Off-Road Championship and with it an indoor venue for 2013. The all-new set-up coincided with an addition to the list of National winners as established 1:8 off-road superstar Elliott Boots took the 2WD win driving the RudeBits DB1 chassis in 2WD.
• TLR 22SCT
The third chassis to evolve from the 22 platform is a short course truck. With the option of a mid or rear motor set-up, the latest 22-based off-roader includes all the features that has made the 2WD buggy and stadium truck such a popular choice around the world.
• Team Associated TC6.1 FT
The latest touring car platform from Team Associated is the TC6.1 Factory Team and it has proven itself a winner in the hands of talented drivers. But how would it fare with someone with lesser ability? Racer builds the new competition TC and puts it to the test at a local indoor club race.
• HPI WR8 3.0 RTR
If you are a rally fan, then you really will love HPI’s new WR8 platform. The WR8 is a 4WD beast with an alloy chassis that is available in either electric or as a nitro model that we have here and both are topped off with stunning Ford Fiesta bodies liveried up in the factory Ford Abu Dhabi World Rally Team scheme from 2011 so it was no surprise that the HPI was our cover choice for this month!
• Atomik Brian Deegan Metal Mulisha 450
After putting the Venom 450 to the test just under a year ago, Racer had the opportunity to put the new Atomik Brian Deegan badged model to the test. Equipped with a gyro in the rear wheel to make it easier to operate, we handed the RTR over to our Ad Sales Manager who took it for a spin – literally!