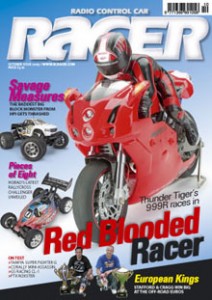 • North and South – All the action from the latest rounds of the BRCA Touring Car Championships at Snetterton and Halifax.

• A New Breed – We give you an advanced look at the new Hyper 8 from HoBao.

• Bury the Opposition – Neil Cargg wraps up both championships at the BRCA National series for 1:10 off-road at Bury Metro.

• British Pride – The British contingent did rather well at the EFRA 1:10 Off-Road European Championships and Racer was there to capture it all.

• Intense Savagery – The ultimate incarnation of the HPI Savage, the 4.6 gets put to the test.

• The Storm Chaser – Racer checks out the successor to GS Racing’s Storm buggy, the CL-1.

• Monster of Rock – Small scale fun from FTX with their mini monster, the Roxster RTR.