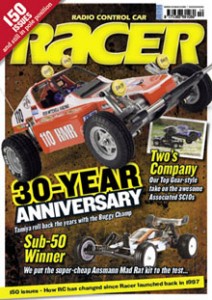 • Six of the Best
The Bantam BC6 is one of top choices when it comes to Lithium-based chargers but why is this? Andy Carter was given the BC6 to find out what makes it tick and why it is now his charge of choice.
• ABS Action
With manufacturers like Tamiya including ABS bodies, we handed an ABS-equipped kit over to our experienced reviewers and asked them for their thoughts and ideas in a quick guide.
• Wings ‘n’ Wheels
A group of RC newcomers get the chance to find out what the hobby is all about at the Stonehaven club.
• Competition
Win the cover car as The Hobby Company offer you the chance to win one of the new iconic Tamiya Buggy Champ kits.
• 150 Issues On
It was back in April of 1997 that the first issue of the magazine hit the shops so we decided to see how some things have changed in RC over the last 150 months.
• Renaud Continues Winning Streak
Defending Champ Renaud Savoya did a great job in Austria as he battled to one of his most impressive victories to date at the European Championships for 1:8 off-road.
• Tamiya Buggy Champ
The icon returns after 30 years away as the Rough Rider returns for 2009 and its now called the Buggy Champ. After all the previews, read the first review here.
• Ansmann Mad Rat
Cheap and making their owners very cheerful are the new kit and RTR versions of this impressive entry-level 2WD buggy.
• Celebrating Euro Success
Juraj Hudy reflects on a dominant performance at the nitro touring European Championships for his team and the NT1.
• The Arrival of Eighth Electric
LRP have entered the 1:8 electric off-road scene with their new S8 BXe 1:8 off-road competition buggy as Jurgen Lautenbach explains.
• Lee Claims First at Two-Day
Associated star Lee Martin took his maiden victory in the 1:8 off-road class at Westmill Farm in Hertfordshire.
• Road Test
We gabbed the opportunity to test Darren Bloomfield’s Losi 8ight-E 2.0 taking it for a blast straight after its first outing at the Neo09.
• Hot Bodies D8T
Being related to a World Champion means high aspirations so we were keen to see if the new D8T truggy has the performance to match its genetics.
• Jonny Be Good
Jon Bowden was in dominant form as the National series headed to the second round at the huge Halifax track.
• Associated SC10
If you cant decide between the kit and RTR version of the new 1:10 scale Associated Short Course truck, then let our in-depth review highlight the differences and make the choice easier!
• Park Life
After making a return to the National scene in 2008, Eden Park Raceway hosted round three of this year’s 1:10 off-road series and a new 2WD winner…