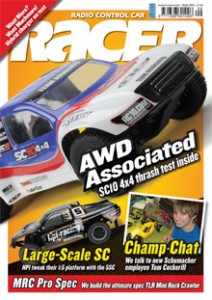 • 60 Second Interview
Racer catches up with 2010 2WD British Champion Tom Cockerill about his new role at Schumacher Racing.
• LRP Column
On its release at the International Warm-Up Race 2011in Bischofsheim, the new ZZ.21C Ceramic engine from LRP did the business as Jurgen Lautenbach reflects back on the race and the virtues of the latest LRP race engine.
• Darren’s Success in the Dirt
Round two of the championships saw the 1:8 off-road National series hi the dirt surface at Coventry as once again, TLR driver and defending champion Darren Bloomfield made it two wins from two.
• Doing the Double in Wales
Wales hoisted round three of the 2011 BRCA 1:10 Off-Road National series at Talywain. After their success at RHR, it seemed that Paul Bradby and Lee Martin, these two racers would once again take the wins in 2WD and 4WD making them championship favourites.
• Lee Martin Diary
It has been another busy month for our factory racer/columnist as Lee Martin once again has travelled around competing in both electric and nitro competition with great results against stiff competition.
• Muchmore Hybrid
The Hybrid charger from Muchmore is compatible with all the latest technologies and with mains and 12V inputs, is perfect at the track or at home. Our in-house team took the opportunity to evaluate this stunning looking item.
• Only the Surface Changed
West London hosted round one of this year’s National series and with few top driver or team changes over the winter, it seems that 2011 will be one of the most competitive yet…
• Team Associated SC10 4×4
When Team Associated decided to launch a 4WD SC truck to compliment their 2WD model, they decided on a brand new platform and a radical design. Racer is one of the first magazines to build, race and review the SC10 4×4.
• TLR Mini Rock Crawler Pro
Racer goes all serious with this 1.9 class rock crawler chassis from TLR as we build up their high-spec Mini Rock Crawler Pro in the style of Championship-winning crawler of Jay Robinette.
• Haiboxing Tigershark
With its rear mounted engine and purple alloy TVP chassis, the HBX Tigershark will look familiar to most RC racers. But not only are good looks on its side, the price of this Chinese truck won’t break the bank either…
• Maisto Baja Beast
Maisto, perhaps better known for their range of small die cast model cars, are now venturing out into the RC car market and Racer tests the Baja Beast, a truck that attempts to bridge the gap between toy and hobby product.
• HPI Baja 5SC
Racer’s large-scale correspondent jumped at the chance to review HPI’s latest evolution of their stunning Baja platform as they find out if the 5SC jumps as well as he did?
• RB One RTR
The One is RB’s first foray into the chassis market and its clear that the company has done their homework. From their own 3.5cc engine through to the Savox servos, this RTR is a high quality RTR racer complete with starter box and NiMH receiver pack