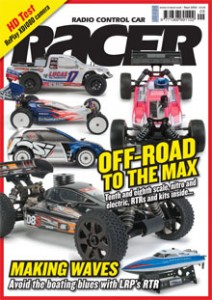 • Martin Points to Maximum
In extremely mixed conditions, Lee Martin proved his credentials with a maximum points haul at round three of the BRCA National series hosted by Eden Park Raceway.
• Carpet Racing
Olly’s monthly piece for August has an indoor feel to it as he offers more support and guidance on tyre preparation, but this time when racing touring cars on carpet.
• Boots Double Take
After success at round one, Coventry hosted the second BRCA National round in 1:8 off-road but the winner remained the same as Elliott Boots dominated for Kyosho, Novarossi and AKA.
• Street Rover
Following hot on the heels of the re-released 2011 version of the 1981 Sand Rover, comes this street version in Tamiya’s 35th RC anniversary year.
• Cars on Camera
Making your own RC videos is made easier with the RePlay XD range of action cameras as Racer evaluates the top of the range XD1080.
• LRP Gets Into The Flow
With the IFMAR 1:12 and TC World Championships just around the corner, Jurgen Lautenbach releases details of their new Flow speed control range.
• Moore is the Man
The Cotswold club hosted round one of the new-look TC Nationals and it was defending champ Andy Moore who took the win.
• Build Guide 2
The second of our two part How To Build a Kit sees Justin look at getting prepared, advice on upgrades and some tips for the main build.
• Deep Blue Something
We head to the water and test
• HPI D8S RTR
Trimmed down and now available as a Ready-To-Run, the D8S uses the DNA of the World Championship-winning Hot Bodies D8 in a package that we found to be ideal for first timers looking to hit the race track.
• Xray XB9
The XB9 is a brand new platform from Xray developed by their lead driver and former European Champion Renaud Savoya. Not only does this 1:8 off-road buggy look different, the handling has been improved in all areas too.
• Team Associated SC10 RS RTR
Three years on from our first review of the SC10, we get our hands on the latest Race Spec model. We evaluate the updates to the chassis and the performance of the brushless and 2.4GHz-equipped RTR package.
• Schumacher Cougar SV2
The new 2WD buggy from Schumacher features a whole raft of changes and improvements as the 2010 BRCA National Champion gets an overhaul for the 2012 season.
• Losi Micro Brushless Rally
Rally car fun in a pocket friendly package! The Losi Micro Brushless Rally is not a new model, but this latest incarnation brings brushless power to the RTR format.