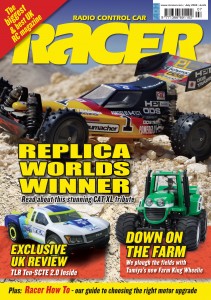 Happy on the Podium – Olly Jefferies’s third place at Cotswold was a good result according to the man himself.

Gadget Show Live – A day at the NEC for Tom Stacey saw him check out the latest tech kit as well as some RC stuff too.

Heavyweight Hitter – The latest Touch charger from Team Orion boasts an impressive spec with high charge and discharge rates as well as some great features to appeal to the keen racer.

Deep Blue Gets Bigger – A new larger version of LRP’s popular Deep Blue One gets put to the test as the editor and son heads out on to the water with the new speed boat.

Upgrading Your 540 – Justin Noble discusses your options when it comes to upgrading a standard spec 540 motor that comes with your RTR.

Dan Replicates Masami – Schumacher won their first World Championship in Romsey back in 1987 with Masami Hirosaka driving a CAT XL.

In keeping with the growing collecting and vintage scene, we take a look at a stunning replica created by Dan Rowlands.

Line-Up Update – This month’s LRP feature sees Jurgen Lautenbach run through their new range of X20 StockSpec motors as well as the competition car line batteries, whilst reflecting on the success of the Flow speed control.

Spashett In Control at Stafford – David Spashett continued his near dominance of the 2012-13 BRCA 1:12 Scale Nationals at round five of the series in Stafford where he took the stock class title.

Bloomfield and Cragg Share Success – The wet weather didn’t detract from the quality of the racing as the BRCA 1:10 Off-Road National Championship got under way for 2013 at Kidderminster.

HPI RTR Sprint 2 Sport Falken Porsche – A more entry-level focus for the electrical package highlights the latest Sprint 2 Sport RTR from HPI, but as we found out, this was without any detrimental effect to the tried and tested chassis or drivetrain.

Tamiya WR-02G Farm King Wheelie – Tamiya are always coming out with alternative style vehicles and the is Farm King Wheelie is the latest testament to this with an unusual chassis that proved to be a lot of fun.

Team Associated Qualifier Series ProLite 4×4 – The Qualifier Series is Team Associated’s new range aimed at the first time buyer with the ProLite 4×4 bing the first model we got to test. We got our hands on the RTR model and under the awesome body lies a brand new shaft-drive chassis and Reedy brushless motive system with plenty of power and speed.

TLR Ten-SCTE 2.0 – Team Losi Racing have given a make-over to their Ten-SCTE platform as they aim to improve its competitiveness against other 4WD short course racing trucks. Our expert gets the 2.0 built up in record time in the first part of our series of articles looking at the new model and our on-track experiences.

Xray T4 – Martin Hudy was handed full responsibility for the latest Xray touring car chassis from father Juraj and here is the result. Not only is Martin a highly-respected on-road racer, but clearly he is a talented designer too as we found out.