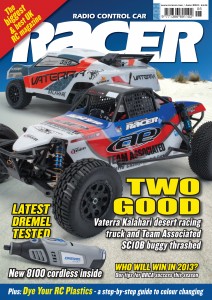 LMR to Hong Kong – Lee Martin takes up his invitation to head to the far east and help some friends out with driving and set-up.

Sticking with 2.4GHz – We analyse the entry-level 2.4GHz stick transmitter package from one of the most established RC radio brands, Acoms.

Colour Changing – Change the colour of your RC plastics with our step-by-step guide.

Racer’s New “Go To” Tool – Dremel have updated their cordless tool with the new and improved 8100. We take a look and see how they have improved their battery-powered model.

Guru-Z Boron – Guru-Z have announced a range of 1:68 scale models controlled by your phone that enables people to experience RC in the smallest of places as tech guru Tom Stacey gets a first look.

Get Yourself a Buddy – Formulux’s new Pit Caddy is the perfect assistant to have for nitro racing – strong, reliable and adaptable! Simon Reeves puts the Caddy to the test.

LRP Increase Air Supply – At the Nuremberg Toy Fair, LRP introduced their first RC quadrocopter and showed off the range of Dynamic 10 and 10L brushless motors.

Spashett Takes Stock And Wins – Another win on Saturday for David Spashett and Mark Stiles on Sunday at the BRCA 1:12 Nationals meant that they would both keep their championship challenges alive with two rounds to go.

Lee and Neil Defend Titles – Keith Robertson previews the 2013 BRCA 1:10 Off-Road National Championships as he takes a look at the drivers, teams, new cars and equipment as well as the six top tracks that the series takes in.

LRP S10 Blast TC Porsche 911 GT3 – The Porsche 911 Carrera GT3 is an unmistakable looking car, and LRP have captured it perfectly in their 1:10 scale rendition of the “Grüne Hölle” using their established Blast TC chassis as the platform.

Team Associated SC10B RS RTR – With all the performance of a short course truck but with the added benefit of a minimalist body set, the SC10B looks awesome and has the handling to match as we found out during our thrash test.

Vaterra Kalahari – We take to the sand once again with the latest Vaterra review in the form of the 1:14 scale 4WD, the Kalahari, named after the famous desert in South Africa.

DHK Hobby Optimus GP- This GP model is the gas-powered version of DHK Hobby’s Optimus buggy. Sharing the same platform as the electric buggy with the obvious differences for the nitro elements taken into consideration, you still get the proven 4WD transmission ad rugged suspension. After reviewing the electric-powered EP model, it made sense for Shaun Taylor to take a look.

Helion Dominus 10TR – Helion may be a new name to readers of Racer, but the people behind it are well known and respected in the industry. The first review sample we have received is the Dominus 10TR truck powered by a Radient Reaktor 3500kV waterproof brushless system and controlled with a 2.4GHz radio. The 1:10 scale relies on a 4WD transmission and adjustable oil-filled shocks to handle the power and take on all sorts of terrain.

Tamiya TT-01 Type-E Subaru BRZ R&D Sport – Using the proven Type E version of the TT-01 chassis, Tamiya has made a fine looking 1:10 model of the latest Subaru BRZ. The full-size Subaru is rated as one of the best handling, low cost coupes ever produced so it the two appear to be the perfect match.

Thunder Tiger SB5 – If you want to have fun on two wheels, then look no further than the SB5 from Thunder Tiger. The SB5 is a 1:5 scale RTR bike and with wheelie-popping power and great looks, it’s no hard to see the appeal.