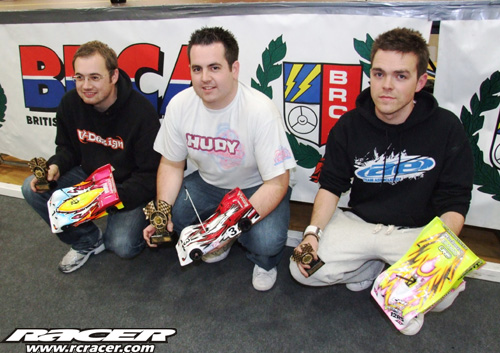 Last weekend saw round one of this winter’s BRCA 1:12 scale nationals take place in Crewe. The meeting saw most of the familiar faces in attendance along with the return of one or two names who haven’t attended the nationals for a couple of years. The most notable of these was Olly Jefferies, who will be driving an Associated R5.1 in this year’s championship. Last years champion Elliott Harper and former European Champion Andy Moore will also be at the next round, but were absent at this meeting due to international racing commitments.

Saturday is stock day, so all drivers run with 10.5 motors. This season sees the introduction of 1S Li-Po batteries as an alternative to 4-cell ni-mh, although most chose to stick with their tried and tested 4-cell packs at this early stage in the season.

Chris Kerswell dominated stock qualifying driving a V-Dezign Carpet Ripper 2.0. At times he was almost a whole lap clear of the chasing pack, but the gap was eventually closed to a handful of seconds by Olly Jefferies who lined up second ahead of Mark Stiles, also driving a V-Dezign.

In the A final, the front runners got away cleanly and the top three began to pull a gap to the chasing pack headed by Andy Griffiths. The front three began to spread out slightly until a mistake by Olly allowed Mark to pass him for second place. As the race passed the five minute mark Chris’ lead began to decrease, and the mounting pressure led to a small mistake which resulted in a grip roll. Mark slipped through into the lead and despite a late charge during the last 90 seconds Chris was unable to regain first place. So Mark Stiles took his maiden BRCA 1:12 scale national victory ahead of Chris Kerswell, with Olly Jefferies cementing his return to 1:12 scale with a solid third place. 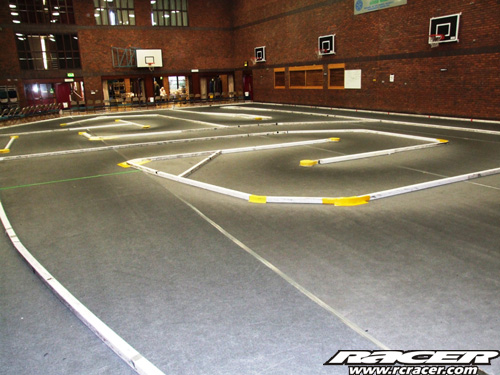 On Sunday the 10.5 motors are swapped for more powerful modified units, with 5.0 and 5.5 turn motors being the norm for most of the front runners. Some drivers choose to stick with their stock motors and race in the sports modified category, and despite this class actually having a larger entry, the open modified category is still seen as the premier class.

In qualifying former British Champion Andy Griffiths was back to his best after making changes to his car overnight. Andy took pole for the A final ahead of Olly Jefferies, with his Associated team mate Keith Robertson third.

The A final turned out to be one of the most competitive for years, with the top seven cars remaining on the lead leap for the duration of the race. An early mistake from Andy Griffiths let Olly Jefferies into the lead, and while Andy set about recovering from eighth place Olly started to open up an advantage at the head of the field. Meanwhile Mark Stiles was making steady progress through the field and found himself in fifth place at the half way stage after starting a lowly ninth on the grid. Further mistakes from other drivers promoted Mark to third with two minutes remaining, while Andy Griffiths had by this time recovered to seconds a couple of seconds up the road. Then to everyone’s surprise, Olly’s car began to slow – a problem later traced to a faulty cell in his battery pack. Andy and Mark smelt a chance of victory and both drivers put the hammer down to close the gap to the leader. Andy caught Olly on the penultimate lap, but his eagerness to get through into the lead resulted in both cars colliding and ending up on their sides. This gifted the lead to Mark Stiles, who drove a controlled final lap to take an astonishing victory from ninth on the grid! Andy recovered to second place, while Chris Kerswell passed a slowing Olly for third on the last lap.

The sports modified class saw an easy TQ and win for Hot Bodies’ Mick Farrell ahead of Nigel Hale driving an Associated. Mark Jewitt was third for Xray. 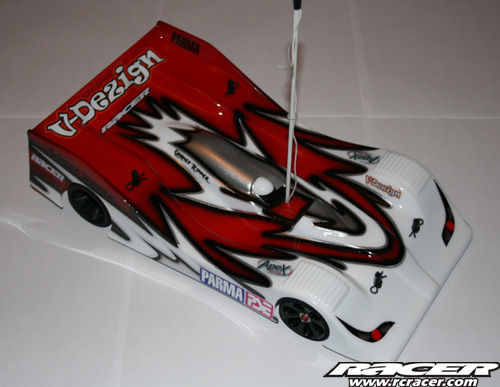 Mark has been trying for that elusive first national win for several years, and came away from Crewe with two popular victories under his belt! This capped off an outstanding weekend for the V-Dezign team, one-two on Saturday followed by filling the podium and the team prize on Sunday!

Full results, championship standings and videos of the A finals will be available soon and see our video page where the A final action is up.