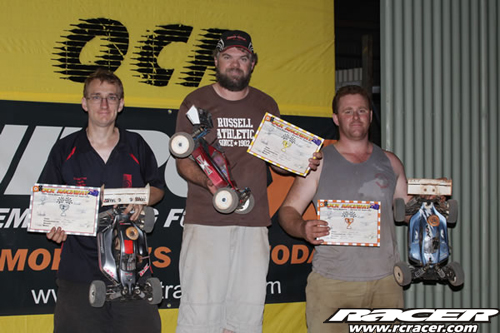 With the drivers being presented with a rain ravaged circuit for Stage II of the Top Dog Dash for Cash Series, it was always going to be a tough event, with very little grip around most of the circuit.

Round one saw Knauth – Hyper 9 – RB get out in front with Gavin Newman – Xray – Nova Rossi early on to run away from the pack with Knauth taking the win 8.49 secs ahead of Newman, the pair putting two laps on closest rival Jesse Newman in third.

Round four, with the circuit beginning to clear up, lap times were coming down, with Jesse getting into the 33 sec bracket, and taking a very close win just 2.54 secs ahead of Gavin Newman and Knauth third, Manalvo fourth, Baker fifth, White, Peckham – RX8E, Mark Sinclair – 808 – RB, Matthew D’Arnay – X1CR – Force, and young Ty Newman – Xray – RB filling out the Top Ten.

Round five, the final round in Stage II saw another hard fought battle between the front runners, with Gavin Newman doing a runner midway through to take the win Manalvo second, Knauth third with Gavin Newman taking the outright stage II win.