Harper and Jefferies Share The Spoils at BRCA 1:12 Round Two

Harper and Jefferies Share The Spoils at BRCA 1:12 Round Two

Xray’s Elliott Harper and Team Associated’s Olly Jefferies took a win each at round two of the 2009/10 BRCA 1:12 scale nationals at Newbury last weekend; a meeting which saw many other â€˜firsts’ beside the overall winners.

On Saturday in the stock class Andy Moore took a convincing TQ ahead of Chris Kerswell and Elliott Harper. The top three were different in the final though and Elliott came through for the win ahead of Chris, who led for a short period before making a mistake. Olly recovered from a crash to take the final podium spot.

Sunday saw a similar story unfold at the front of the field in open modified qualifying. Once again Olly was on pole, but this time using a LiPo battery pack to take the first ever TQ for a LiPo powered car at a BRCA 1:12 scale national. Andy Moore was also trying out the new LiPo technology, but struggled for pace somewhat and ended up reverting back to NiMh cells for the final qualifying round and the final. He would line up second for Hot Bodies ahead of the V-Dezign car of Chris Kerswell. 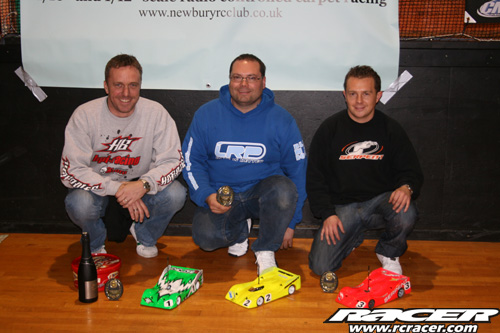 Mick Farrell took a comfortable TQ in sports modified and looked to have the win all but sewn up prior to the A final. However, a spirited final performance from the Serpent duo of Richard Hicklin and 1:12 scale newbie Mark Green left Mick scratching his head in amazement. Somehow Mark found 0.3 of a second per lap in the final, and after an early mistake from Mick he ended up taking the win ahead of Mick, with Richard finishing third after a strong run.

The open modified final was a very close affair in the early stages, with the top six qualifiers all running nose to tail for almost half of the race! Olly and Andy broke away at the front and battle ensued, with Olly coming out the victor after soaking up the pressure from Andy. Chris Kerswell made the podium for the second day in a row after a crash for Elliott Harper left him fending off the attention of Mark Stiles in the final stages. These two finished fourth and fifth respectively.

So a meeting packed full of firsts; a first BRCA 1:12 national meeting for the Newbury club, a first TQ and win for a LiPo powered car and a first national win for the Associated R5.1! Visit www.brca.org in the coming weeks for the complete meeting results. A full meeting report will be featured in Racer Magazine soon.

Round 3 takes place at Tamworth and will feature the Saturday night Christmas party, this year seeing the return of the infamous â€˜naughty table’!