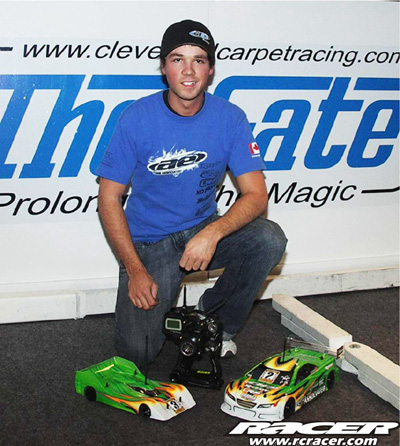 LRPs all new VECTOR X12 Stock Spec brushless motor made an impressive debut in the US at the 2009 Halloween Classic.

Typically held at the world-famous Cleveland, Ohio landmark â€œThe Gateâ€, the 2009 Halloween Classic has found a new home at the equally impressive Holiday Inn. The Classic also served as round one of the 2009/2010 Northeast Grand Slam Series.

As has become the norm, LRP driver Keven HÃ©bert from Canada drove his LRP-powered TC5R to a convincing victory in the Super Stock 13.5 Rubber Class. The Super Stock 13.5T Rubber Class has become the most prestigious touring car class in the U.S., and HÃ©bert’s speciality. Qualifying on the outside of the front row, Keven quickly gained the lead and never looked back to cap another successful weekend.

Keven’s VECTOR X12 Stock Spec and SPX Stock Spec powered TC5R has steadily improved thanks to extensive testing and new setups. The LRP SPX Stock Spec ESC proved once again that it is the premier power speedo in the Super Stock class.

In the Pro Foam TC class, Drew Ellis debuted the LRP X-12 Stock Spec 10.5. After qualifying third, Drew steadily worked his way into the lead and held on for the win. With their victories, Keven and Drew took the first out of many victories to come in the US with the new VECTOR X12 Stock Spec brushless motor.