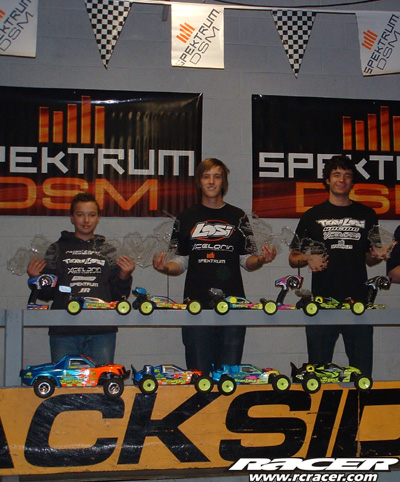 Matt Chambers, Dustin Evans, and Dakotah Phend competed in the 2009 Spektrum Off-Road Championships, hosted by Trackside Hobbies in Milwaukee, WI. With around 200 entries in the race, triple A-mains were only run for the modified 2wd class, leaving the modified truck and 4wd class to a single A-main.

In the Modified 2wd class, Dustin was the Top Qualifier. In the A1 race Dustin took advantage of his TQ by leading for the duration of the race. In A2 Matt finished in second and Dakotah finished in third. In A3 Dustin again led the race with Matt finishing in third and Dakotah taking fourth. With a win in A1 and A3, it sealed the win for Dustin, Team Losi Racing, and Spektrum. Matt would grab the final podium spot in third with Dakotah finishing fourth.

In the single A-main for Modified truck it was Dustin again starting from TQ and claiming the victory with Matt finishing in third and Dakotah in 5th. 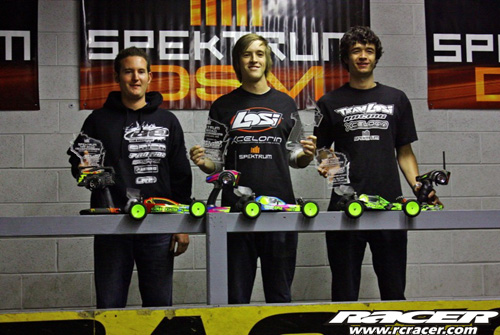 In the 4-Wheel class the single A-main go for it all type of racing caused a collision of 6-8 cars on the backstraight. However, Matt was able to finish the race in fourth and Dakotah in fifth.

Dakotah also competed in the 1:10 Modified Short Course A-Main. Dakotah took second place in the A-Main with his Losi Strike, powered by an Xcelorin Brushless Motor and ESC.

Dakotah, Dustin and Matt were all using Losi Pink BK Bars rears and Pink Taper fronts on their Team Losi Racing XXX-CRs, XXXT-CRs, and XXX-4s. All vehicles were powered by Xcelorin Brushless Motors and ESCs and Losi LiPos.