TQ And Podium For Olly And R5 At Tamworth

TQ And Podium For Olly And R5 At Tamworth 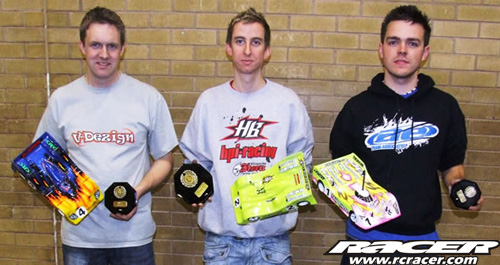 Olly Jefferies continued his good run of recent form with a TQ and 3rd place at last weekend’s 1:12 national at Tamworth.

Tamworth in the Midlands was the venue for round three of this years BRCA 1:12 national series. This event had a very festive feel to it with drivers racing Pro Stock and modified over a busy weekend which also included the now famous 1:12 Christmas party.

Saturday saw frustration for Olly as he struggled in Pro Stock. A couple of good times early on showed promise but like at round two at Newbury Olly slipped back and lined up fourth for the A final by the close of qualifying. A brave if not impetuous move on Andy Griffiths on lap one saw Olly unceremoniously slapped around after a spin in the first corner from which he never recovered, tenth and a DNF means that this is likely to be a dropped score for Olly.

Sundays and modified have proved a happier hunting ground for Olly and sure enough his good qualifying form from Newbury continued and once again Olly took TQ and put the R5 on pole for the A final. Andy Moore had looked sharp all weekend and it was he that would go on to take the eventual win with Andy Griffiths second. After dropping back a little Olly recovered to overhaul Elliott Harper to take third at the final buzzer.

The modified result keeps Olly right in the hunt for the modified title but he needs a good result in Pro Stock at the next round at Plymouth after Christmas if he is too be a contender in the Saturday class.