How To Gear It Right

How To Gear It Right

Gearing means making a compromise between acceleration, top speed and duration. How do you find the right combination?
It is probably fair to say that finding the correct gearing for your radio control touring car requires experimentation or experience, and sometimes both. The tech charts published in the radio control car magazines or on the Internet can give you a guide to the gearing used by some of the top drivers, and these can be a good starting point. However, it is only when your car hits the track for the first time that you will really discover whether it delivers the required mix of top speed, acceleration and duration. 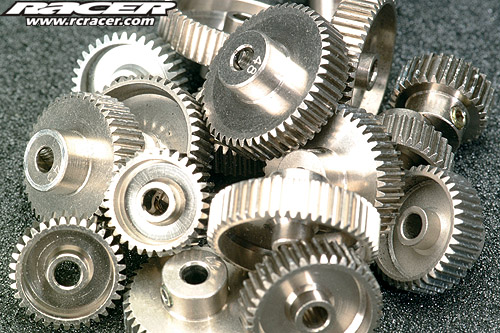 An electric powered touring car uses an on-board battery pack, so there is always a limited amount of energy available to use up during the race. The gearing needs to be optimised to ensure the battery power is not fully consumed before the car has crossed the finish line. If not, all of the cars you have carefully negotiated during the race will come blasting by on the final lap as your car crawls towards the finish with flat cells. With a nitro touring car, you can always make a fuel stop, but get the gearing right and you can stretch out the time between pit stops, helping to build an advantage on the track.

Two things affect the distance a touring car will travel for one rotation of the engine or motor, the gearing and the diameter of the tyres. A simple mathematical formula can be used to bring this information together, allowing the millimetres per rev (MMPR) to be accurately calculated. Expressing the movement of the car in this way enables direct comparisons to be made between different makes of car, even when they are running on different profile tyres and internal gear ratios.
The MMPR your car should be geared on depends on a whole host of factors, not least the number of minutes you are racing for and the size of the circuit. A high MMPR will typically give a greater top speed, but at the expense of acceleration and duration. Conversely, a low MMPR will really let the engine rev, giving good acceleration and improved duration, but a slower top speed. 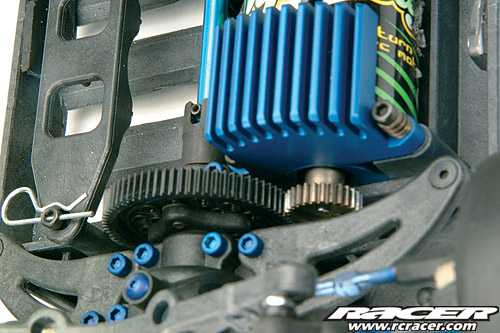 On a four wheel-drive car, the gearing depends on the number of teeth on the chosen pinion and spur gear, and the internal gearbox ratio, sometimes referred to as the â€œfinal drive ratioâ€. This ratio is typically documented in the instructions provided with the kit. To calculate the MMPR, you then use the following formula:

Let’s choose an (now aged) electric powered Associated RC10TC3 touring car running on fairly low profile tyres as an example. Using a pair of callipers, we find the tyres are 58mm in diameter, so multiplying these by 3.1416 gives the circumference of the tyre. We then divide that by the number of teeth on the spur gear and multiply by the number of teeth on the pinion. Finally we divide the result by the final drive ratio, which the instruction booklet for the TC3 tells us is 2.5:1. So the MMPR for a couple of very different circuits could be:

Outside on the tarmac circuit, the 32-tooth pinion gives a high MMPR, which will make the car move further for each rev of the motor. This gives it a very high top speed, but at the expense of acceleration. This is fine on wide, flowing circuits where the speed of the car can be maintained through the corners, but throw in a few hairpins and coming down a couple of teeth on the pinion can provide a better compromise. Indoors on the small carpet circuit, the straights are much shorter and the corners are tighter. Acceleration therefore becomes more important than top speed, making it better to run a much smaller pinion, such as the 22-tooth one we fitted here.

Unless you are a mathematical genius, you will need to take a calculator with you to work out the MMPR of your car. However, most drivers tend to use the same car, the same diameter tyres and the same spur gear throughout a race meeting. It is therefore a pretty easy task to calculate the MMPR for each of the pinions you happen to have in your pit-box. Record these in a table and it will be easy to see the effect of moving up or down a tooth. Record next to this the circuits on which a particular pinion was run and you will quickly build up a very useful gearing guide. 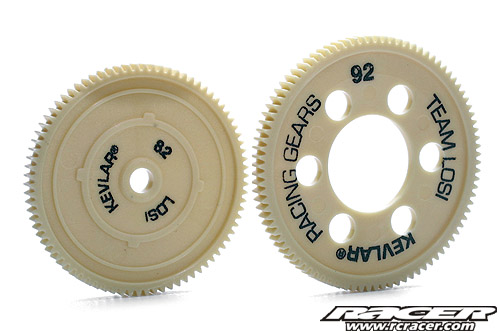 With an electric powered car, your choice of motor will influence the gearing. Assuming the timing on the motors is similar, a stock motor will not rev as highly as a modified motor for example, so it needs to be geared on a higher MMPR in order for the car to reach the same top speed. If you have any doubts at all about the gearing to run a particular motor on, always err on the safe side and run a small pinion. Under-gearing a motor simply allows it to rev more and will do the motor no harm at all compared to over-gearing it. Running too large a pinion can put the motor under a lot of strain. The current draw will be high, the commutator will quickly get scored or marked, brushes will start to discolour and the motor can may lose some magnetism. Such changes will eventually happen to a correctly geared motor too, but it will take many more races before the effects begin to show. 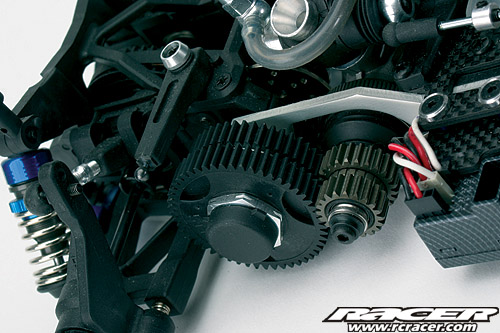 The MMPR calculations get more interesting on a nitro-powered car fitted with a multi-speed gearbox. On this you need to calculate the MMPR for each available spur/pinion combination, and then decide the engine revs at which the gearbox should change from one pinion to the other. Get this right and you can obtain the perfect compromise between acceleration and top speed for any circuit. A two or three-tooth gap between the gears often works best. With more than a four-tooth gap, the gears may be susceptible to damage.