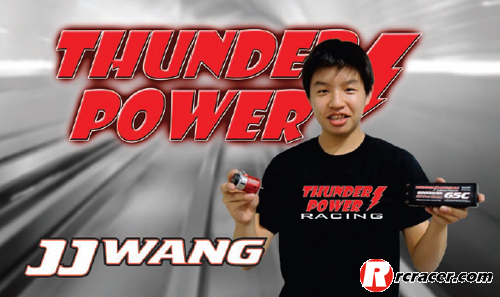 Thunder Power RC has signed JJ Wang as the newest addition to their racing team. Known throughout China as one of the rising stars of modified touring car and off-road racing, 14-year-old JJ will represent Team Thunder Power RC. JJ may be relatively new to the electric racing scene, but is known in the nitro classes as China’s youngest competitive driver. At the age of 11, JJ was recognised by winning the Tamiya Asia Cup Junior Championship.
JJ has launched his electric career with a fourth place finish in the 4WD class at the last TITC race. Stepping up his game, powered by Thunder Power RC, JJ recently won the 4WD Short Course Truck and 2WD Buggy classes at the Horizon Hobby Cup. JJ will run Thunder Power RC Z3R motors and batteries to power his 2012-2013 racing season.
JJ shared his thoughts on his partnership with TPRC: “I’m very motivated and excited to join the Thunder Power RC team. I think their products have very high quality and I’m looking forward to using them the upcoming season.”
JJ will represent the TPRC Team in China and at various International and US electric/LiPo events. Thunder Power RC would like to welcome and thank JJ for trusting in them to be the power behind his recent podium level performance. His next race is the Invitational Reedy Race of Champions in Union City, California on 24 May 2012.