Cristo Dominates Race For A Cure with X-60 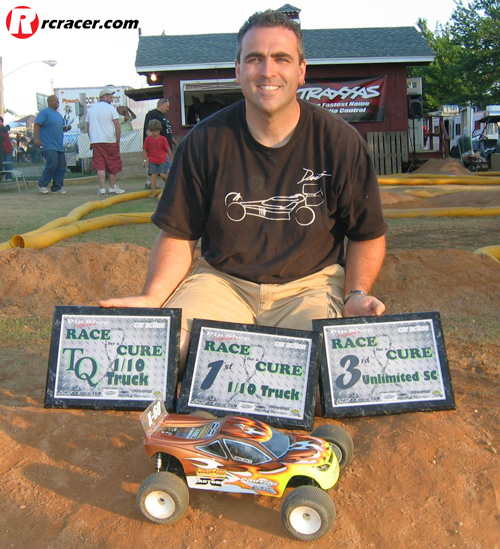 Last weekend Pin Stop Hobbies presented the Race For A Cure at the Goshen Connecticut Fairgrounds and X Factory Team driver Chris Cristo TQed and won 1:10 stadium truck with his X-60. Cristo took three of the four qualifiers and won the first two A finals to sew up the title.
The race was held in the centre of the fairgrounds during the Goshen Stampede, which is a large fair with a rodeo, demolition derby, truck pulling, carnival rides and concerts; more than 10,000 people attended during the three days. The RC track was built in a grassy area in the middle of everything, with dirt jumps and grass on the level parts of the track, so the fair attendees were constantly watching RC action. They even set up a seating area for the spectators.
Through the three day event the grass parts of the track deteriorated as racing progressed, such that very little grass was left when the finals started Sunday. The extremely slippery conditions suited Cristo and his X-60 truck well and he won both finals comfortably with smooth consistent drives. After A2 Chris said, â€œWhen the grass went away the loose top soil became very slippery, but my mid-motor X-60 doesn’t seem to care if it’s high traction or an ice rink. I’ve never driven anything so stable no matter what the conditions are.â€