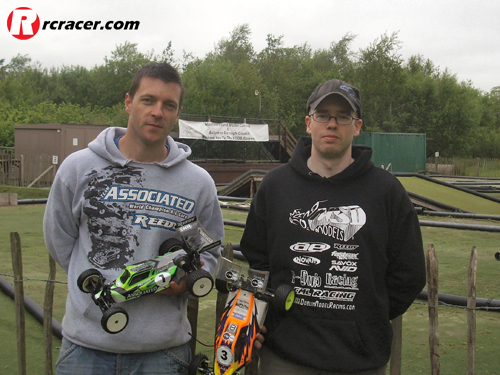 Round two of the Irish Nationals took place on the 9 June at the all Astroturf Northern Ireland Model Car Club. After a near solid week of rain, the drivers were presented with a damp and low traction racetrack. The format of the day was an hour open practice with four rounds of qualifying with three leg finals.
In the 2WD modified, CML/Rennicks ModelTune supported driver Mark Penny was dominant, placing his Reedy-powered C4.1 on pole, posting the fastest time in all four rounds of qualifying. Michael ‘Mick’ Bolger, (CML/MSD Models/P-Dub Racing) placed his Novak/Reedy- powered C4.1 on the second spot of the grid. In the finals and after some close racing, Mark won the first and third legs to give him the overall win with Michael placing his C4.1 third overall.
The 4WD modified category was a very closely fought class. Michael managed to win legs two and three with his Novak/Reedy-powered B44.1 by a small margin over Aaron Vance. The difference in leg three was just 0.34 of a second, but it was enough to give Michael the overall win.
Wrapping up a successful weekend for Team Associated in Ireland, on Sunday Michael won 2WD modified and 4WD modified classes at the third round of the DMCC club championships.

Full results can be found here.