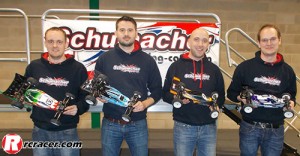 Schumacher driver Nathan Waters has won the competitive 2WD Silverstone Winter Series against some of the best off-road drivers in the country. The event took place over six rounds on an indoor high-grip Astroturf track and attracted some 136 entries.
In the final round, Nathan set a convincing TQ with his Schumacher Cougar KF2, but the race win went to team mate Lloyd Storey with Schumacher drivers Iain Mellish second and Dave Poulter third. This result meant that Lloyd secured second in the championship and Dave Poulter third. 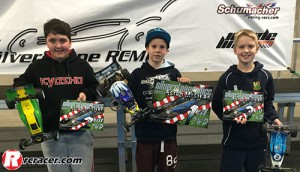 The under 13 junior class was won by Lewis Jones with his KF2 ahed of Ben Pugh (Kyosho) and Harry Weedon (Schumacher). Congratulations to everyone and to the Silverstone club for putting on excellent series.